Judge says migrant worker from Vietnam ‘has been totally exploited’ 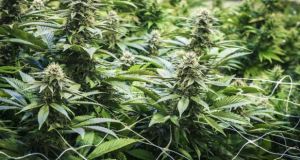 Gardaí seized about €900,000 worth of cannabis from the grow house.

A Garda sniffer dog, Laser, detected a cannabis grow house worker concealed in the chimney breast of a luxury lakeside home last May, a court has heard.

Mother-of-two Thuy Thi Nguyen (33) was found hiding in the chimney breast during the search of Tinarana House on the shores of Lough Derg on May 31st last.

Garda Paddy Regan told Ennis Circuit Court that Laser was trained in following the scent of persons and Ms Thi Nguyen was the only person found. She was arrested at the scene.

He said Ms Thi Nguyen had worked at the grow-house for a couple of months. She said she was never paid for her work.

Ms Thi Nguyen has pleaded guilty to cultivating without a licence cannabis plants at Tinarana House on May 31st.

Ms Thi Nguyen has been on remand in custody since her arrest on May 31st.

When Ms Nguyen was first cautioned and charged with the offence last June, she replied: “I feel upset and scared because they forced me to do it.”

Garda Regan said Ms Thi Nguyen had arrived under false pretences at the address and had no knowledge that there was a grow-house there. She had wanted to do restaurant work in Ireland.

Garda Regan said that Tinarana House has been dis-used since 2013 and that the grow-house operation was very professional.

Mark Nicholas SC, for Ms Thi Nguyen, said the property “was owned by people locally more so for an investment”.

Mr Nicholas said Ms Thi Nguyen is from a rural area of Vietnam and left school at 12 and went to work. He said she had no trappings of wealth and left behind her two boys in Vietnam to provide for them.

Ms Thi Nguyen was “a very low level cog”, said Mr Nicholas. She first went to Russia picking fruit and moved across Europe in the backs of trucks. He said she was disenfranchised and desperate – “the perfect ingredients to be exploited”.

Judge Gerard Keys said Ms Thi Nguyen “has been totally exploited”. He stated: “What concerns me is what happens now?”

After taking instructions from Ms Thi Nguyen, Mr Nicholas stated that she doesn’t wish to return to Vietnam if she is released from custody as there is nothing in Vietnam to support her.

He stated that Ms Thi Nguyen wishes to remain in Ireland and take her chances.

Mr Nicholas stated: “She finds a kindness here – a kindness she hasn’t found in other countries. She is prepared to take her chances and try to build something positive in this country – a country that she loves.”

Lorcan Connolly BL, for the State, said if Ms Thi Nguyen is released she would likely to be a candidate for deportation.