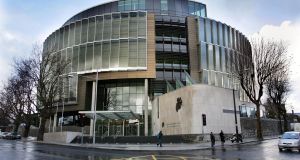 Judge Melanie Greally said Mohiuddin conducted a legitimate business and was a family man. She said it was a “significant error of judgment” and out of character but said he carried out the offences for financial reward. Photograph: Matt Kavanagh

A father of five who allowed his bank account to be used in a fraud because he was under financial pressure has been jailed.

The money was transferred in five separate transactions between February and March 2017 but Mohiuddin never received the €10,000.

The company received an email from a supplier in February 2017 advising them that they had switched bank accounts and requesting that all future payments be directed to a different account number.

The fraud came to light when the supplier contacted Enercon and stated that they had not received any of the five payments. The total transferred was just over €202,000.

Mohiuddin of Upper Clanbrassil Street, Dublin pleaded guilty at Dublin Circuit Criminal Court to five charges of handling cash knowing or believing it to be stolen on dates in February and March 2017. He has no previous convictions.

She said it was a “significant error of judgment” and out of character but said he carried out the offences for financial reward.

“He must have been either aware or had a strong suspicion that the money had been gained in a fraudulent way,” Judge Greally said. She sentenced Mohiuddin to three and half years in prison and suspended the final 18 months of the term on strict conditions.

Gda Daly told Mr McCormack a Garda investigation was launched and Mohiuddin was arrested after it was discovered that the money had been transferred to an account registered in his name.

His bank account, which had a balance of just under €52,000, was frozen by the State.

The garda said “nothing of evidential value” came out of Mohiuddin’s initial interview with gardaí­ but he later came to the station in October 2017 where he made a statement claiming that he had met a man through a friend who offered him €10,000 for the use of his bank account.

He said he could not give gardaí­ the name of this other man as he was in fear of him.

Gda Daly agreed with James Dwyer SC, defending, that the crime “was not very sophisticated” from his client’s point of view as it was easy to trace the account back to him.

He accepted that Mohiuddin’s plea of guilty saved a number of witnesses having to come from other jurisdictions to give evidence at a trial.

Gda Daly accepted that Mohiuddin was “not the mastermind at the top of the tree” and that he did not have a lavish lifestyle. He has a shop and a taxi plate and is the father of five children.

Gda Daly further accepted that Mohiuddin’s business was struggling at the time and that was why he agreed to get involved.

Mr Dwyer said his client “made a considerable error of judgment when he was in a particularly vulnerable financial position as a family man”.

He asked Judge Greally to accept that his client was “otherwise a man of excellent character” and did not benefit in any way financially from his role.

Counsel accepted that Mohiuddin “played an integral role” but suggested he was on “the bottom rung of the ladder”.