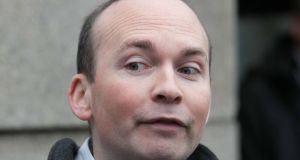 Counsel for Paul Murphy TD indicated to Dublin Circuit Criminal Court the defence was “anxious” for further disclosure, but his client would be seeking a trial date on the next occasion. Photograph: Gareth Chaney/Collins

Counsel for Mr Murphy indicated to the court the defence was “anxious” for further disclosure, but his client would be seeking a trial date on the next occasion.

Ms Burton and her entourage had left a graduation event at An Cosan Education Centre at Jobstown, Tallaght when a demonstration was held which delayed her for about two hours on November 15th, 2014.

She and her team had been attempting to travel by car to the Church of St Thomas the Apostle for the rest of the ceremony when it is alleged violence broke out.

Mr Murphy (32), with an address at The Copse, Woodpark, Ballinteer, appeared at Dublin Circuit Criminal Court along with 18 others, some facing charges of false imprisonment and violent disorder.

Mr McGillicuddy submitted a number of the accused were seeking trial dates, some wished for arraignment dates and some defence counsel were looking for more disclosure.

He said the best approach is to keep matters together at this stage as a trial with 19 people “might not be feasible”.

Judge Melanie Greally granted senior counsel in all cases, apart from Cllr Mahon, to whom legal aid has not yet been assigned.

She remanded Mr Murphy and all his co-accused on continuing bail to appear on March 7th.