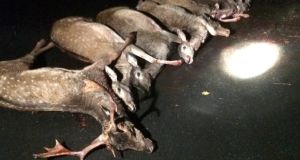 Operation Bambi, a Garda investigation of illegal poaching, found social-media video and photographs of deer that had been hunted with dogs, a court has heard.

Three men pleaded guilty at Clonmel Circuit Court on Tuesday to illegally hunting and killing wild deer, and to causing them unnecessary suffering, between September 2014 and January 2015.

The Garda was alerted to the images by a member of the Irish Wild Deer Association, who said he had come across “disturbing footage on Facebook”, Sgt Barry Boland told the court.

Bitten in the neck

Gardaí saw one clip on Facebook, filmed in a field near Clonmel, of a red stag being bitten in the neck by three dogs before escaping across the River Suir. An investigation included “trawling through social media”, Sgt Boland said; they came across a number of other stills that showed either deer being hunted with dogs or people posing in front of deer lying dead. All were taken at night.

The Garda said eight people were involved in the hunting, which used dogs that were a greyhound-bulldog cross to take down deer. “These dogs are specially bred. They are big and aggressive,” the sergeant told the court. The video and images found on the internet showed 12 deer.

Neither O’Dwyer nor Murphy realised that what they were doing was illegal, and Regan didn’t appreciate the cruelty involved “until it was shown to him”, the court was told. They regarded deer hunting as a sport.

Judge Thomas Teehan said the crimes involved “inherent cruelty to animals through the pursuit of those animals by quite vicious dogs, bred for the purposes of hunting deer”.

A charge against Regan of possession for sale or supply of cocaine worth €5,675 was adjourned for a year to allow him to collect €2,000 for a charity that helps victims of drug crime. All three were told to pay €1,000 each to animal-welfare organisations within nine months.

Plans to evacuate Irish citizens from China virus epicentre under way 00:10
Election 2020: Party leaders clash on multiple issues in TV debate 00:10
Election 2020: Sinn Féin wants new 5% tax on people earning over €140,000 00:05
Housing the dominant issue in seven-way general election debate 23:55
‘There’s so much change that people want and that they didn’t get’ – Zappone 23:45