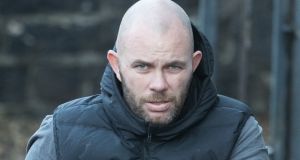 Defence counsel told the court the defendant Noel McGreene from Cluain Na Mara, Kilkee, Co Clare (above) “found himself unexpectedly confronted with circumstances that no red blooded man would wish to be confronted with”.

A man has told a court he thought he had hypothermia as he fled naked on a freezing night to his granny’s house after being found in bed with another man’s fiancee.

James Bracken (29) was giving a victim impact statement at Ennis Circuit Court on Friday in a case which had been adjourned from earlier this week.

On Wednesday the court was told Noel McGreene (37) struck Mr Bracken on the head with a bottle of Baileys after finding him naked in bed with his fiancee at his Kilkee home at around 4am on February 12th 2017.

McGreene pleaded guilty to assault causing harm to Mr Bracken on the night.

Judge Gerald Keys imposed a suspended six month prison term for the assault after stating there was “a high degree of provocation in the case”.

The judge said he had been told McGreene “is a hard working and decent man and is not a violent man”.

The case had been adjourned to enable Mr Bracken give a victim impact statement.

Mr Bracken who was in court with his mother on Friday provided a hand written victim impact statement which was read out by counsel for the State, Lorcan Connolly BL.

In it Mr Bracken said he thought McGreene was going to kill him on the night. “I was hit repeatedly on my head and my face with a bottle of Baileys. I was thrown down a flight of stairs from the top to the bottom. I got stitches and staples to my wounds on my head.

“I really thought he was going to kill me. I ran from the house naked and bleeding from my head and eye.

“I was running trying to get away from him. I was terrified and ran. I kept falling and staggering and having to stop as I had lost a lot of blood and felt really weak.

“It was freezing and I thought I had hypothermia.”

He added that the only place he had to go for safety was his 80-year-old grandmother’s house.

“She was very shaken after seeing the state I was in and to this day, she worries and stresses about me if I go out anywhere,” he said.

“Since the attack, I have had to change my hair to cover the scars for fear of being misjudged as a violent person.

“I don’t trust people very easily anymore especially women and I haven’t had a relationship since as I just can’t trust them.”

Defence counsel Brian McInerney told the court the defendant “found himself unexpectedly confronted with circumstances that no red blooded man would wish to be confronted with”.

He said his client accepted he overreacted and pleaded guilty. He had picked up the Bailey’s bottle and “ ejected Mr Bracken from the premises in fairly short order.”

The court was previously told Mr Bracken had been out socialising with the defendant’s fiancee - who he believed was not in a relationship with the defendant at that point in time. T hey returned to Mr McGreene’s home at Cluain Na Mara, Kilkee, were drinking Baileys and brought the bottle to the bedroom. McGreene returned to his bedroom unannounced and “found this strange naked gentleman in his bed”, defence counsel had said.

Mr McInerney said there was no suggestion his client pursed Mr Bracken around Kilkee.

He added: “The concept of Mr Bracken not trusting women anymore - how that can be visited upon my client I just don’t know.”

The defendant was a father of four whose first partner died of cancer a number of years ago and he was left to bring up the children by himself.

In imposing the suspended jail term, Judge Keys said he was mindful the DPP had recommended the assault charge could have been heard in the District Court.

Judge Keys also imposed a suspended two year jail term on McGreene on a separate charge of possession of €3,230 worth of cannabis for the purposes of selling at Skenhanagh, Clarecastle on November 24th 2017. He said he was taking into account the time served in jail since October by McGreene.