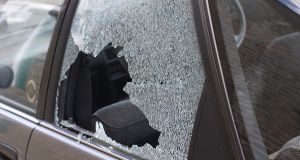 The incident occurred last year when the victim was driving through Dolphin’s Barn, Dublin. Photograph: iStock

A robber with more than 100 previous convictions broke a woman’s finger when he smashed the window of the car she was driving and grabbed her handbag, a court has heard.

Mark Dwyer stole a handbag containing €920 in cash when he broke into the car his victim, Christine Pollard, was driving through Dolphin’s Barn, Dublin Circuit Criminal Court heard on Monday.

Dwyer (41) with an address in Dolphin House, Rialto, Dublin, pleaded guilty to one count of robbing Ms Pollard at Dolphin’s Barn on October 1st last year.

Garda Ian Foley told Garrett McCormack BL, prosecuting, that Ms Pollard was driving through the area and her car was stopped when Dwyer appeared on the passenger side, smashed the window and leaned in to grab her handbag.

Ms Pollard held on to the bag and a tussle ensued before Dwyer made off with the handbag. Ms Pollard sustained a broken ring finger during the exchange.

A witness to the robbery recognised Dwyer as a customer in the local supermarket where she worked and identified him to gardaí. Dwyer’s DNA matched blood taken from Ms Pollard’s car.

A victim impact statement was handed up to court. The court heard Ms Pollard’s finger was in a splint for 16 weeks and she continues to get treatment.

She said she now felt vulnerable when she was alone in her car and was suspicious of others. The total value of goods stolen from her was €990, including her handbag, sunglasses and cash. None of it was recovered.

Defence barrister, Michael Hourigan BL, said his client had a long-standing drug addiction since he was a young man.

He said that after Dwyer was released in 2015, he did well for a while. However, at the time of this offence he had relapsed into drug use following a bout of pneumonia. He has been in custody since the robbery and has been using his time well in custody, Mr Hourigan said.

Judge Martina Baxter noted it was a serious offence and Dwyer had a “serious record”. She ordered a number of reports and adjourned the matter for sentencing on July 30th.