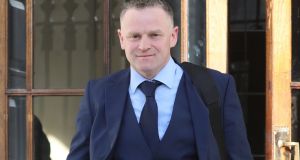 A man wanted to negotiate with an insurance company on behalf of his wife, sister-in-law and niece with regard to their claims for injuries arising from an alleged rear-ending collision, a judge was told Monday.

He said Darcy had proposed settlement talks for his wife Rachel, her sister Denise Crowley Cox and a niece, Ciara Darcy.

Mr Martin said Liberty Insurance special investigator Dean Dowling had since been able to link Michael Darcy with a passenger in the car that had run into the back of a taxi in which his three family members had been travelling with a friend, Karen Ryan.

He told the court that in November 2017 Michael Darcy had been jailed for 18 months in the Dublin Circuit Criminal Court. He had pleading guilty to fraud, having made a fake insurance claim alleging jewellery worth more than €40,000 had been stolen from him during a fictitious break-in at his home.

Mr Martin said Karen Ryan, (32) of Thornhill Gardens, Celbridge, Co Kildare, and Ciara Darcy (25) of Parkview, Greenhills Road, Tallaght, had since consented to their damages claims of €60,000 each being dismissed, while Crowley Cox (47) a hairdresser of Verscoyle Vale, Saggart, Co Dublin, had never prosecuted her €60,000 claim.

Judge Garavan on Monday dismissed the €60,000 damages claim of Rachel Darcy (37) of Castle Park, Tallaght, and directed the papers be referred to the Director of Public Prosecutions for her further consideration. Michael and Rachel Darcy’s address was also given as Parkhill West, Kilnamanagh, Dublin.

Dean Dowling, of Liberty Insurance’s special investigation unit, said that when Michael Darcy contacted the company on behalf of his wife, sister-in-law and niece he had stated he would get the three of them together for talks and added: “They won’t be bought off. They will be expecting a decent offer.”

The judge said Rachel Darcy had not turned up in court on Monday to substantiate her personal injuries claim and he had been told she had made no reply to various communications from her solicitors about the case. He had allowed her solicitors to come off record in her case.

“There are far too many cases like this coming in front of the courts and I am happy to refer the documentation to the DPP for further investigation,” Judge Garavan said.

AXA had spent €6,200 to prove the claim was fake and Michael Darcy ultimately pleaded guilty and was sentenced to 18 months by Judge Martin Nolan in November 2017.

None of the parties was in court on Monday in relation to any of the claims mentioned to Judge Garavan.