Man jailed for facilitating entry of illegal immigrants into State 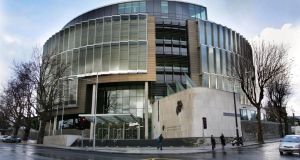 The judge said the Georgian man was a ‘very busy cog’ in a large, sophisticated organisation

A Georgian national who facilitated the movement of illegal immigrants into Ireland by organising and distributing false identification cards and driving licences has been jailed for three years.

The 23-year-old man cannot be named following a court ruling as he is associated with three others, including his father, who are still before the courts.

The four were arrested following a large-scale Garda operation involving 20 officers who analysed and collected data over a period of two years.

Their results were then forwarded to a senior intelligence analyst who compiled a report for the prosecution of the case.

The man pleaded guilty at Dublin Circuit Criminal Court to 13 sample charges including the possession of false identification cards and driving licences, deception charges, money laundering, and trafficking of illegal immigrants between October 5th, 2017 and May 23rd, 2019.

Detective Sergeant Anthony Collins told Gráinne O’Neill BL, prosecuting, that he became involved in the investigation in the middle of last year but it had been going on since 2017 following a referral from another country.

Authorities here were informed that a passenger had attempted to board a flight to Ireland using false documentation that appeared to have been couriered using a Dublin address.

Det Sgt Collins confirmed it was typically Georgian migrants who were the end users of these” bogus identities”. He said these were people who wished to enter Ireland who would then make contact with a member of the group via social media. They would then be sent a price list of the various identities available before they transferred a sum of money for the documents.

The person then flew to Ireland and would destroy their “genuine documentation” before landing. They would claim asylum on their arrival here.

He said on a few occasions when a person was prevented from boarding a flight in a Spanish or French airport on the basis that the documentation was not legitimate, the group would forward them a replacement identification to try and board a later flight.

He said through looking into the incident further it became apparent that there was “a pattern of offending” in that these documents were being prepared in Ireland using passport photographs of the intended recipient, with fictitious names.

Det Sgt Collins said the investigation, which included analysing CCTV footage from DHL at the airport, the General Post Office and various money-transfer companies, led to the arrest of the four who are currently before the courts.

“It is the State’s case that there is a number of people involved,” Det Sgt Collins said as Ms O’Neill handed in a page of the senior analyst report which depicted two family trees and identified the accused and the three other accused within these families.

Det Sgt Collins said the man collected a total of €23,817 over the course of the operation, much of which he sent back to his family in his own country.

He said that at the time of his arrest the man was in possession of three bogus identifications, a Polish driving licence and a Czech identity card and driving licence.

Luigi Rea BL, defending, submitted that his client was “a very small cog in a very large, sophisticated organisation” to which Judge Martin Nolan replied; “He was a very busy cog”.

Mr Rea asked the court to take into account that he was the youngest member involved, that he had pleaded guilty at an early stage and suggested that “he has clearly learned a lesson”. He said his client has been in custody since his arrest in December 2019 and “now knows what prison is like”.

Judge Nolan said the man was involved in “an enterprise that facilitated the illegal immigration of people into this country” by distributing false documentation that allowed the recipients to travel on.

“He had his place in the hierarchy. He didn’t have the ability to create the documents but he was involved in their distribution and in receipt of certain money for them,” Judge Nolan continued before he described the man as “a vital cog”.

The judge said the gardaí were alerted by authorities from other countries that the documents had been shipped from Ireland and “they investigated it and investigated it well”.

Judge Nolan acknowledged that the man had pleaded guilty but said it was “a serious crime and the surrounding circumstances of the crimes are serious”.

He noted his plea of guilty, his lack of serious previous convictions and the fact that he seemed well capable of working following his release from prison.

“He involved himself by reason of his relationship with other people but he knew the difference between right and wrong and unfortunately for him he adopted the wrong course,” Judge Nolan said before he added that the man deserved a custodial sentence and jailed him for three years.

The three other people are due to be listed in the coming weeks at Dublin Circuit Criminal Court. They have yet to indicate whether they will elect for a trial or plead guilty to the offences.