Man jailed after assaulting Luas commuter with a screwdriver 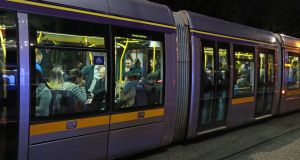 A man who assaulted a morning commuter on a Luas tram has been jailed. File photograph Nick Bradshaw/The Irish Times

A man who assaulted a morning commuter on a Luas tram has been jailed for 4 ½ years.

Lee Murray (24), formerly of Sheepmoor Lawn, Blanchardstown, Dublin, pleaded guilty at Dublin Circuit Criminal Court to assault of Sam Hess causing him harm. He also admitting attempting to rob Mr Hess and producing a screwdriver during the assault on the Luas on November 26th, 2016.

Murray also pleaded guilty to assaulting Brian O’Carroll causing him harm at his shop on Drumcondra Road on July 8th, 2017. The court heard he attacked the shop owner after Mr O’Carroll challenged him over the theft of three bottles of WKD.

During a struggle, Murray knocked Mr O’Carroll to the ground and hit him on the back of the head, knocking him unconscious. Murray ran off but was caught nearby by gardaí who were on point duty for a Coldplay concert in Croke Park.

Judge Cormac Quinn sentenced Murray to four years in prison for the Luas attack. He imposed a consecutive two-year prison term for the later assault and suspended the final 18 months on condition Murray keep the peace.

Garda Damien Killalea told the court that Mr Hess had been on his way to work at a building site in the early hours of the morning.

He was on the Luas and heading towards the Rialto stop in south Dublin when Murray and a group of men and women got on the tram.

They were making a lot of noise and one man approached Mr Hess and asked for a cigarette. Mr Hess offered him the entire packet and the man continued talking to him.

The court heard that Murray then pulled out a flat-head screwdriver and grabbed Mr Hess and told him to take out whatever he had in his pockets.

When the victim expressed surprise, Murray pushed the tool into the victim’s knuckle and the hand began “pouring blood”. The group got off the train and Mr Hess got off later and sought medical attention.

He told gardaí later that he was very fearful. A victim impact statement was given to the judge as evidence but was not read out in court.

After his arrest Murray said he had been very drunk and had taken tablets and the incident was a blur. He was shocked when shown footage of the incident and told gardaí he wanted to apologise to the victim.

Mr Killalea said that Murray’s 34 previous convictions include theft and possession of drugs. Last February he was sentenced to 20 months’ imprisonment for a firearms offence.

Jane McGowan BL, defending, presented a letter of remorse from Murray and said he was very embarrassed by his behaviour.

She said Murray had done “everything that was asked of him” in prison and was spoken of very highly by his probation officer.

Counsel said Murray became addicted to heroin by the age of 19 and that all of his offending stemmed from his drug use, but that he had now started a drug rehabilitation programme.

Mr Justice Quinn cited the seriousness of the assaults as an aggravating factor in both cases, as well as the physical and psychological effects on the victims. Further aggravating factors included the use of a screwdriver in the Luas attack and the fact that for the second assault Murray had been on bail.

In mitigation, Mr Justice Quinn noted Murray’s drug addiction and periods of homelessness. He said Murray had pleaded guilty, shown remorse and was on an enhanced regime in prison.

The judge said credit was to be given to Murray for time spent in custody on these offences.