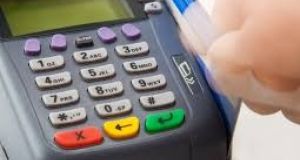 A man was spotted returning a pub’s stolen credit card machine after using it to try to refund himself €7,500, a court has heard.

Lawrence Mubango (31) was caught by the manager of Mary’s Pub, Wicklow Street, Dublin 2 when the manager saw him reaching behind the counter and placing the credit card machine back behind the bar.

Det Garda Eoin Kirwan told Dublin Circuit Criminal Court that the refund facility had been activated and €7,500 was entered to be refunded.

CCTV footage showed Mubango taking the machine from behind the bar.

Mubango had the credit card machine in his possession for fewer than 10 minutes. The transaction was cancelled in time and the pub suffered no financial loss.

Mubango is currently serving a 10 year prison sentence for a drink and cocaine fuelled knife attack on two friends on May 17th, 2018. The attack left one man eviscerated.

The father of one is originally from Zimbabwe and first came to Ireland aged 12.

Judge Martin Nolan said Mubango tried to steal €7,500 by taking the machine. He said it would be “absolutely asinine” for the court not to take into account why he took the machine.

Judge Nolan said that compared to the wrongdoing that gave rise to his current prison sentence, this offence “is a minor matter”.

He sentenced Mubango to three months imprisonment and ordered that it run consecutive to the sentence he is currently serving.

He said that if Mubango were not currently serving a sentence, the sentence for this offence would have been considerably longer.