Man behind €27,000 holiday scam given time to repay victims 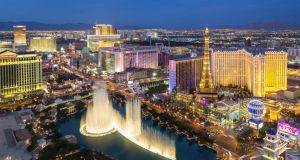 A man who stole over €27,000 from friends and acquaintances by selling them bogus package holidays has been given more time to pay back his victims.

The court heard he had been selling three different holiday packages to New York, Las Vegas and Cape Town while claiming to be an agent for “Top Flight”. His defence counsel said he used the money to keep up with “his cocaine lifestyle” having lost his job.

Lawyers for Weinrib on Friday said he had raised €9,900 so far and asked for more time to continue to put compensation together. Judge Mary Ellen Ring agreed to adjourn the matter until July 22nd, next.

One man had paid €3,200 for four nights for four people in the Bellagio Hotel in Las Vegas, while the other had paid €550 for a two night stay in New York.

Both men received some documentation bearing the Top Flight logo from Weinrib but later discovered that there was no such holiday reserved for them.

Weinrib was taken in for questioning the following month and admitted that he took bank drafts from the men to cover the cost of the holidays. He confirmed the holidays were never booked and said he had intended to refund them.

“I did intend to run a promotion to honour them but it snowballed,” Weinrib told gardaí.

He admitted that he had never worked for Top Flight and that the documentation was a forgery.

During a subsequent search of Weinrib’s apartment gardaí­ discovered a list of people and contact details and evidence on his computer of the documents generated with the Top Flight logo.

Weinrib later admitted that other friends and acquaintances had been sold bogus holidays. He claimed that some had been refunded but told gardaí­ it was “a right fucking mess”.

In total Weinrib sold these packages, which also included a package holiday worth €1,100 for the Mandela Rhodes Place hotel in Cape Town, to 20 people. He made €27,600 in the scam.

Det Garda Bresnan agreed with Lorcan Stains BL, defending, that his client was co-operative with the investigation and had no previous convictions.

He accepted that it had not been a complicated offence and it was only “a matter of time” before the gardaí­ would have been alerted.

Counsel suggested to Det Garda Bresnan that while this had been “a crime of stupidity, from the outset it actually was a crime of desperation”.

Mr Staines said Weinrib had started to “engage in cocaine taking and the cocaine lifestyle” and subsequently lost his job.

He was embarrassed by that fact and tried to “keep up with the lifestyle but didn’t have the pay cheque to match it”.

Counsel submitted that his client was “acting under a fantasy” that he would ultimately be able to refund everyone.

A psychologist report said Weinrib suffers from anxiety and stress, has a poor coping mechanism, is easily overwhelmed and has low moods and panic attacks. He has recently been diagnosed as bi-polar.

“At first brush it seems idiotic but it goes deeper than that because we are dealing with an intelligent man,” Mr Staines told Judge Ring and submitted that it was “a head in the sand scenario”.

“I would say that it is more than a head in the sand at this stage,” Judge Ring commented, “he doesn’t seem to be taking seriously that he is facing a custodial sentence at the moment.”

She previously adjourned the case after acknowledging that Weinrib intends to use half of his current weekly wage of €400 to refund his victims.