Judge queries lawyers as €300,000 in fraudulent claims are dismissed

‘Some solicitors should be more selective about who they take on,’ says Judge Jacqueline Linnane 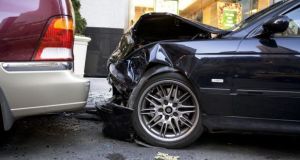 The judge dismissed five fraudulent damages claims for up to €300,000. Photograph: Stock image

Solicitors who handle what eventually turn out to be set-up accidents may be contributing to fraudulent personal injury claims, a judge said on Wednesday in what is the strongest criticism yet by the judiciary of some members of the legal profession.

“Perhaps some solicitors should be a bit more selective about who they take on,” Judge Jacqueline Linnane stated in the Circuit Civil Court when dismissing five fraudulent damages claims for up to €300,000 by London members of the Travelling community, who were allegedly on a sight-seeing tour of Dublin.

The judge directed that all of the documented evidence brought together in five files by legal and investigative staff of RSA Insurance Ireland, who carried out a major investigation into the claims, be forwarded to the Director of Public Prosecutions.

Judge Linnane also suggested RSA Insurance should consider contacting the Incorporated Law Society. She said none of these cases would proceed to court unless solicitors agreed to act in them and she felt some committee within the Law Society might be concerned about it.

“Maybe fuller inquiries should be made by solicitors before they take on these cases but I will leave it to RSA whether they wish to instruct their legal representatives to bring it to the attention of the Law Society,” Judge Linnane told barrister Moira Flahive, counsel for the insurance firm.

Judge Linnane said P. Tiernan and Company, of 9 Crowe Street, Dundalk, Co Louth, solicitors for the five claimants, had not turned up in court for the application by RSA to have all of the cases dismissed but had only on Tuesday evening phoned a barrister to appear without explicit instructions or papers.

She said RSA’s applications had not been challenged in what were undisputed fraudulent claims. P. Tiernan and Co had obviously decided these cases were dead ducks and in light of what had been deposed on affidavit by solicitor David Culleton they did not intend wasting any money on them.

The judge said that affidavits of Mr Culleton of DAC Beachcroft Solicitors, on behalf of RSA and outlining the fraud behind each of the five claims, made devastating reading. He believed a number of accidents associated with the claims before the court and the claims arising from them bore all of the hallmarks of a sustained pattern of organised insurance fraud.

Joseph Stokes, a 22-year-old gardener; John O’Donnell (33) and Melissa McDonagh (26), all of 27 Lynton Close, London; John Christopher McDonagh, aged 26 of 5 Lynton Close and Bridget Mongan, aged 31, of 15 Waterford Way, Dollis Hill, London, had all claimed €60,000 each in relation to alleged whiplash injuries they claimed to have suffered in an accident in May 2015 near Sutton Road, Howth, Dublin.

Judge Linnane said that from the affidavit of Mr Culleton it was clear the accident and other accidents and people closely associated with the plaintiffs were part of a sustained pattern of organised insurance fraud.

Robert Marsland, Church View, Knockagorna, Omeath, Co Louth, owner and driver of the second car involved in the May 2015 accident was also named as a defendant in the five cases before the court but did not appear.

Ms Flahive said Mr Marsland was a named driver on a motor policy which expired just over two weeks after the Howth accident. Ownership of the car he was driving at the time had been transferred into his name only one day before the accident and indemnity by the insurance company had been declined.

Judge Linnane said fraud was a fact in the case and had not been denied. She said the five plaintiffs had stated they had been on a sight-seeing trip to Dublin. It was clear they had travelled from London to stage the accident in Dublin.

Judge Linnane said some solicitors did not even say in correspondence they had tried to contact their client without success or had been unable to get instructions from their clients. She said the evidence of Mr Culleton in the case of Joseph Stokes had been mirrored in the other four cases, which were identical.

Ms Flahive said there had been enormous costs involved in RSA’s investigation into the accident and the background relating to other people and other accidents. She applied for a costs order against all of the plaintiffs, which was granted.

The judge dismissed all of the claims and directed that the papers in all of the cases be sent to the DPP. Ms Flahive said she had not received any instructions with regard to reporting the matter to the Law Society but would discuss it with the insurance company.

None of the claimants or Robert Marsland appeared in court.

A statement was issued after the case on behalf of P Tiernan and Co in which they said they received a letter from the law firm acting for the defendants, DAC Beachcrot, on October 31st, “whch suggested fraud on the part of the plaintiffs”.

They said they spoke to the plaintiffs and advised them that the firm was no longer willing to act on their behalf.

“We advised the plaintiffs to discontinue the action but they indicated they were instructing another firm of solicitors to act on their behalf.”

They said they wrote to DAC Beachcroft on November 2nd 2018 advising that they were no longer acting in the matter and that other solicitors would be coming on record.

“We also wrote to each of the plaintiffs confirming that we were no longer acting on their behalf due to the allegations being made by the defendant’s solicitors in respect of the matter.”

“In response to an enquiry from DAC Beachcroft on the 6th February 2019, we again confirmed we were not acting for the plaintiffs in these matters. This position was reiterated by us in a telephone conversation on 8th April 2019, having been informed that day by our former clients that they instructed a new firm of solicitors.”

It was in those circumstances that the firm did not apply to formally come off record as it expected a new firm of solicitors to come on record, the firm said.

“We asked a barrister to attend court as a matter of courtesy to the court. We had expected the plaintiffs new solicitors to be in attendance and to come on record. The firm P.Tiernan & Co Solicitors does not act in cases involving claims of a fraudulent nature.”