Damien Klasinski knocked down Willie Crowley in Newbridge in December 2015 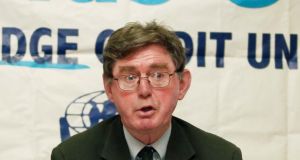 File image of Willie Crowley, who was knocked down and killed in December 2015. File photograph: Colin Keegan/Collins Dublin

A hit-and-run driver who knocked down and killed Co Kildare councillor Willie Crowley in December 2015 has been jailed for four years.

Mr Crowley (56) died in Naas General Hospital from related head injuries a few days after he was struck by a car driven by Damien Klasinski (29) in Newbridge on the evening of December 15th, 2015.

Mr Crowley had been walking home from his local pub at the time of the incident.

Klasinski, of The Oaks, Newbridge, Co Kildare, drove off after hitting Mr Crowley, asking the three other passengers in the car: “What am I supposed to do?”

The passengers then came forward to gardaí and Klasinski was arrested the next day, when gardaí found him hiding in a wardrobe at a friend’s home.

In an interview, he told gardaí that he had panicked, saying: “I am very sorry. It was an accident. I’m really hoping this man recovers.”

Sentencing Klasinski on Friday, the judge suspended the last 18 months of a five-and-a-half-year sentence. She also disqualified him from driving for 10 years.

She said Klasinski was entitled to credit for his plea of guilty, his admissions to gardaí, his remorse, his employment history and family circumstances and the fact that, as a non-national, prison would be more difficult for him.

She said that he had driven too fast in conditions which demanded caution and a more moderate speed.

She said other aggravating factors included the fact that he had no licence or insurance.

The judge said the incident marked the third time in 10 months that the accused was detected for driving offences.

The judge said Klasinski’s decision to drive away showed an abject disregard for the life of his victim and was a serious aggravating factor.