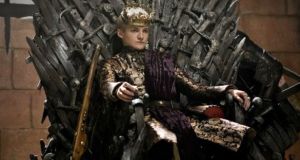 A scene from HBO’s ‘Game of Thrones’, featuring the Iron Throne.

A dispute between two business partners about an official Game of Thrones Iron Throne replica, which is being commercially showcased all over Ireland, has been resolved, the Circuit Civil Court has been told.

Mark Russell, of Block A, Smithfield Market, Smithfield, Dublin, had claimed that his business partner, Stephen Cronin Saleh, planned to remove the throne from the country.

Mr Russell had claimed that last March he and Mr Cronin Saleh agreed to purchase and exploit the HBO-licensed replica of the throne in the TV series.

The court had heard that Mr Russell bought the throne for €15,000 from a seller in Canada.

It had then been licensed to Mr Cronin Saleh, who was granted an option to buy the throne, and both parties had agreed to a profit share arrangement.

Barrister Stephen Moran, counsel for Mr Russell, had said the initial agreement stated that the throne was to remain his client’s property until Mr Cronin Saleh had repaid the €15,000.

The ownership of the title would then be transferred to Mr Cronin Saleh.

Mr Russell claimed they had also agreed to incorporate a company, Fancosmic Ltd, and that he would get 35 per cent of its shares. He had also been registered as a director of the company.

The court heard that the throne was to be displayed at events and shopping centres in Ireland and Britain, where members of the public would be given the opportunity to sit in it and have their picture taken for a €10 to €25 fee.

The court had heard that Mr Cronin Saleh removed Mr Russell as a director of Fancosmic Ltd last June.

He had also removed Mr Russell’s access privileges and cancelled all his permissions regarding the company.

The court had heard that Mr Russell believed that Mr Cronin Saleh intended to remove the throne from the country and Mr Russell had sought an injunction against him and Fancosmic Ltd, of Upper Pembroke Street, Dublin.

The judge had last week accepted an undertaking by Mr Cronin Saleh not to remove the throne from the country until the full hearing of the application on Wednesday.

Terms of the settlement include payments of money by Mr Cronin Saleh to Mr Russell, who will relinquish his rights to the throne.

The court heard that when the throne was displayed at the Mahon Point shopping centre in Cork last April, Fancosmic Ltd generated €7,500 in revenue.