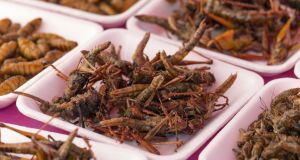 A businessman who sells edible insects faces jail for a professional shoplifting scheme where he stole high-value household goods to order.

Anthonie Van Wilderoden (44), a Dutch national living in Wicklow, set up a business called Eddiebug with the help of a government loan. The company sells insects as a speciality foodstuff.

He is also the director of a chocolate-making company in Wicklow.

He said he began the shoplifting enterprise because he had built up heavy debt and his estranged wife had gone to the United States with his children leaving him with no way to support himself.

Dublin Circuit Criminal Court heard he would put up advertisements on the Donedeal website selling household products. He would then steal these products from shops depending on the interest in the ad. None of the buyers knew the goods were stolen.

Van Wilderoden used a modified baby’s pram to steal items from Arnotts, Curries and Harvey Norman including a Nespresso coffee machine, crockery sets, a vacuum cleaner and an electric blanket.

He was caught and charged in 2015, but was arrested again shortly afterwards for stealing a €900 Jimmy Choo handbag from Brown Thomas. Van Wilderoden claimed this was supposed to be a mother’s day present and that it wasn’t stolen to order.

Van Wilderoden of Ballyknockan, Valleymount, pleaded guilty to 10 sample counts of theft from the four stores between December 2014 and March 2015. He also admitted possession of a specially modified pram and possession of three stolen gold-plated mirrors.

Garda Michael Moran told prosecuting counsel Pieter Le Vert that he got a call from a security guard at Arnotts, Henry Street, who became suspicious when he saw Van Wilderoden wheeling around a pram with no baby in it.

The garda stopped the accused and found crockery sets and a coffee-maker inside. The pram had been modified with bungee cords to hold down the goods.

Van Wilderoden was arrested and admitted taking the goods but said they were presents for his wife’s birthday. He allowed gardaí to search his car where they found goods stolen from other stores such as a high-end food mixer and a broadband modem.

Gardaí also found two pages with goods listed on it. Van Wilderoden admitted this was a “shopping list” which he used to keep track of what to steal. He admitted he put the ads online and stole the goods to order.

He was released on bail and two months later was caught stealing the handbag from Brown Thomas. On this occasion gardaí searched his house and found three stolen mirrors.

Van Wilderoden was again released on bail and later entered an early guilty plea. However, he then fled to Belgium before his sentence date. He was arrested on a European arrest warrant and returned to Ireland in November 2016.

He has 19 previous convictions from Ireland, The Netherlands and Belgium including fraud, forgery, theft and embezzlement.

Van Wilderoden said he set up his businesses with his wife using loans from his wealthy father-in-law. He said he owed money to this person as well as lending institutions and a loan shark.

He received a insurance payout of €155,000 resulting from a botched surgery that caused him to lose a kidney. He said he used this money to repay his father-in-law.

Defence counsel Sean Rafter said Van Wilderoden was sexually abused as a child and became a male prostitute as a teen. He said he saved the money from this to set up his first business but that he was “a person who is totally incapable of handling money.”

Counsel said Van Wilderoden had bought an airplane ticket back to the Netherlands and if he was given a suspended sentence he was willing to promise not to return to Ireland.