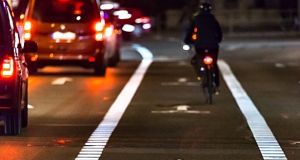 The court had heard that the double-decker bus struck Mary White and she suffered terminal injuries as a result. File photograph: Getty Images

Drivers must have particular regard to the vulnerability of cyclists on the road, a judge has said in the sentencing of a bus driver whose driving caused the death of cyclist.

Osborn Irabor (58) of French Park, Tyrrelstown, Dublin had pleaded not guilty to careless driving causing the death of Mary White (55) on November 17th, 2014 .

At a sentence hearing on Monday at Dublin Circuit Criminal Court, Judge Francis Comerford heard that at about 9.40pm that night the double-decker bus driven by Irabor struck White. She was knocked off her bike, sustained traumatic head injuries and died two days later. In a victim impact statement the victim’s elderly mother, Peg White, said her daughter had spent 35 years cycling around Dublin and was meticulous on the roads.

Ms White, from Co. Meath, said suggestions during the trial that her daughter was at fault were hard on the family, though she accepted defence lawyers were doing their job.

The collision occurred at a T junction on Burlington Road in the south of the city. White had front and back lights and was wearing a high-visability jacket. The judge said she was a responsible road user. He said one of two aggravating factors in the case was the fact that Irabor was a professional driver. The other was the “vulnerability” of cyclists.

The evidence in the trial was that the bus began cutting the corner at 5m from the junction. It did not come up to the yield marking.

The judge said there was no criminal intent. He said that he had no doubt that Irabor did not see the bicycle and he believed the likely reason for this was a blind spot created by the driver’s wing mirror.

He said if the bus had stopped at the junction the bicycle would not have been in the blind spot.

“The bicycle was in the blind spot because the bus was cutting the corner,” he said. “Failure to see her resulted from that breach in standard of driving, (something) a reasonable and prudent driver wouldn’t undertake.”

A professional driver should have been aware of the blind spot, he added.

He said he had no doubt that Irabor believed the road he was turning into was clear but that this view did not take into account visibility on the night, the potential presence of cyclists and the blind spot.

He said that Irabor’s conduct was at the lower end of the range of risk. Irabor has no previous convictions and has an unblemished safety record since he began working for Dublin Bus in 2007.

The judge said he was not satisfied that the level of careless driving warranted imprisonment. He said a mandatory driving ban of four years followed from the conviction and that this would most likely result in Irabor losing his job.

He said this was sufficient punishment. But he added “there is no comparison between the loss of Mary White and her family and the burden the ban places on Irabor”.

Garnet Orange SC, defending, asked the court to defer the driving ban to January as the job loss would go hard on the father-of-three in the run up to Christmas. The judge ordered the disqualification to take effect from New Year’s Day next.

Mr Orange said the collision took place late at night in a location with limited traffic at that time. When gardaí­ arrived on the scene Irabor was in a very distressed state. The judge noted that this distress has persisted and that Irabor has received psychiatric therapy.

Mr Orange said that Irabor is a deacon in a local Christian church and is deeply remorseful.

“This is something that still brings him to tears. He is absolutely devastated in his role in death of Mary White,” counsel said.

During the trial Mr Orange told the jury that what killed Ms White was the head injury sustained when the back of her head hit the road. He said her helmet was not fastened and had only being resting on her head.

The court heard the helmet was found on the road and could not be fastened. Detective Sgt Kelly agreed that gardaí never retrieved any clip that might be used to fasten the helmet.

In her statement Ms White said that it would have been easier for the family if Irabor had pleaded guilty. She said her daughter had worked in Crumlin Children’s hospital for 20 years and was coming home from an evening class in philosophy when the bus hit her bike.

She said that her organs were donated and her kidneys were given to a young girl who regularly writes to the family.

“Mary would have been delighted she had helped this person,” said Ms White.

Ms White said that even after the verdict he didn’t say sorry. Mr Orange told the court that his client was instructed by the company’s insurance company not to apologise or to make any admissions at the scenes of collisions.

“My client received directions from his employer not to make admissions to the family,” he said.

He said both parties were travelling at comparatively low speeds and that a moment’s inadvertence on Irabor’s part led to tragedy.

He said that there was nothing in his client’s driving prior to the accident that would suggest that he is or was in any way a danger to road users.

He said there may well have been a degree of complacency on the part of his client when not coming to a full stop at the junction.

The judge said that it was a further element of sadness to try to think about the victim’s point of view on the night.

He said that based on the slow speed at which it was moving on to the road, she would have further assumed that it was going to stop.

“Because he was driving at a slow speed the danger was not obvious,” he said.

He noted testimonials from many fellow Dublin Bus workers describing Irabor as honest, truthful, reliant and hardworking. He noted he continued to suffer distress as a result of the events and said “he has to live with consequences that a lapse in his driving did cause the death”.