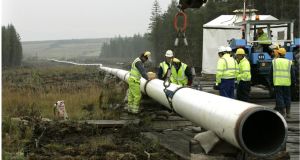 Two protesters have been found not guilty of violent disorder during a protest at a Shell compound in north Mayo.

The two men pleaded not guilty to the offences and following a nine-day trial before Judge Petria McDonnell in Castlebar Circuit Criminal Court, the jury of eight women and four men took less than two hours to record a unanimous verdict of not guilty.

Following the verdict, both men hugged each other and thanked the jury before embracing family members and supporters who were present in Castlebar Court House.

The trial heard that up to 70 protesters entered the compound and allegedly caused damage to equipment. They refused to leave the compound when asked by security officers and the court heard a “running battle” ensued which meant the security had to retreat to an inner compound on the site.

Mr Bourke had been accused of causing damage to heras fencing while Mr Heffernan was accused of damaging timber hand rails while on the site. Both were charged with criminal damage but they were also cleared of this charge after the prosecution entered a nolle prosequi halfway through the trial and withdrew the charges.

Giving evidence in his defence, Mr Bourke - a married father-of-three - told Brendan Nix SC, for the defence, that he farmed 200 metres from the gas pipe and claimed the last 10 years have been a nightmare for him and his family. He explained that he lived in the ‘kill zone’ which he said was how the area was described at a Bord Pleanála oral hearing into the project. “It has been a ten year nightmare,” he said. “One of Shells own people eventually admitted at the oral hearing that we would have 30 seconds to leave our home if there was an explosion. What they proposed we should do was to find a ditch and go around it and we’d be safe. It is a nightmare that is what it is.”

In relation to the protest on June 23rd, 2013, Mr Bourke said t tunneling for the underwater pipeline through Sruwaddacon Bay was taking place at the time and claimed the sand was bubbling up. He said he contacted Mayo County Council but claimed nothing was done about it. He admitted entering the Shell compound and removing the perimeter fence but denied that he was violent.

Mr Heffernan also gave evidence in his defence and explained he got involved in the protests in 2011 citing social, economic and political reasons. He told his senior counsel, Conor Dignam he met local people opposed to the project and claimed their civil liberties had been eroded.

Before retiring to consider their verdict, Mr Nix told the jury his client has been treated with contempt and asked them to consider why ‘good people’ like Mr Bourke would get involved in protests.

Mr Dignam said his client had come to the Corrib protests out of concern for the local community and claimed what occurred on the day did not amount to violent disorder.

Judge McDonnell thanked the jury and excepted them from jury duty for three years.

1 Coronavirus: Irish citizens advised not to travel to Italy’s affected areas
2 Why Sinn Féin will not call the State by its name
3 Divisive Leitrim rape case raises questions about future trials
4 Maureen Dowd: For the White House parasite, all restraint has gone
5 Snow and ice warning issued as communities battle floods
Real news has value SUBSCRIBE