Company director gets 10 years for arson and attempted fraud

Perpetrator ordered to repay over €30,000 to the State after attempted insurance scam 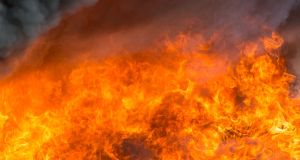 A scenes of crime examiner told the court there were six separate seats to the fire which had been started using oil, shredded paper and pallets and had caused extensive damage. File photograph: Getty Images

A 47-year-old company director has been given a 10-year suspended jail sentence for arson and attempted fraud. He was also ordered to pay more than €30,000 to the State having set fire to his business after increasing his insurance cover.

David Healy, of Tig na Mona, Rathankar, Passage West, Co Cork, had denied a charge of arson that caused €200,000 worth of damage at Munster Air Compressors – a company of which he was a director – at Kilbarry Cottages, Dublin Hill, Cork, on December 16th, 2014.

But a jury found him guilty of the charge following a six-day trial at Cork Circuit Criminal Court. Healy subsequently pleaded guilty to a second charge of making a fraudulent insurance claim against FBD Insurance on January 8th, 2015.

Healy had been remanded in custody following his conviction on May 15th and today Judge Gerard O’Brien sentenced him to seven years in jail for the arson and three years consecutive for the attempted fraud. But he suspended both on condition Healy pay the State €33,000.

The judge noted that gardaí were alerted by a fire brigade chief fire officer Robbie McGowan who informed detectives that he believed the blaze had been started deliberately. He told gardaí there were several seats to the fire or places where it had started.

Mr McGowan estimated that it would have taken between one and two hours to start the blaze. And there was no sign of forced entry to the premises which had been locked up by Healy that evening as he was the last to leave the building.

Scenes of crime examiner Det Garda Derry Griffin told the court that there were six separate seats to the fire which had been started using oil, shredded paper and pallets and had caused extensive damage to the premises.

Det Garda John Gleeson told the court that Healy had claimed to be at home at the time of the fire when he was interviewed by gardaí. But when detectives examined CCTV footage from the Kilbarry area, they found footage of his car there on the night of the fire.

The judge recalled how Healy had also increased his insurance cover on stock at the premises from €52,000 to €350,000 earlier in 2014. And the judge also noted that Healy had made a claim on his insurance in the wake of the fire, but nothing had been paid as gardaí charged him with arson and attempted fraud.

The judge said it was fortunate that no one, either firefighters or members of the public, was injured in the blaze. He said the courts had always taken a very serious view of arson and that was reflected in the fact that the penalty included a jail term up to life and/or a fine.

Insurance fraud was also a serious problem for society which usually ended up being paid for via higher premiums, although in this case Healy himself sustained the entirety of the loss, said the judge.

He said that he viewed the arson charge as being in the mid-range in terms of gravity. And the fact that there were so many seats to the fire and it was so carefully planned indicated a level of premeditation that was an aggravating factor. Consequently, he believed seven years was the appropriate term.

However, the judge said the attempted fraud was at in the upper end of that range. And he believed a three-year term was appropriate given the sentence carried a maximum of five years. But he said Healy deserved credit for his guilty plea, so he sentenced him to three years consecutive to the seven-year term.

The judge said that he believed that in the circumstances – including the fact that Healy had no relevant previous convictions and was at a low risk of reoffending – he would suspended the entire 10 years on condition €33,000 be repaid and Healy be of good behaviour for two years.