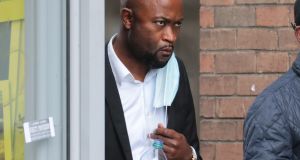 A driver for Dublin Bus, who was held by a judge to have repeatedly lied under oath, has lost a €60,000 rear-ending damages claim and has been directed to pay the legal costs and expenses of RSA Insurance.

Judge John O’Connor told Freddy Diankenda (45) that the court was satisfied he had told one lie after another in his evidence and that he had deliberately withheld relevant information from doctors and his legal team in the case.

He said he would not make any orders with regard to remitting papers in the case to the Director of Public Prosecutions (DPP) as he felt it was a matter for insurance companies in such actions to advocate any potential criminal follow-up.

Judge O’Connor told barrister Paul McMorrow, counsel for RSA Insurance, which successfully applied to have Mr Diankenda’s case thrown out, that the court was conscious about doing anything that might prejudice a trial.

Mr McMorrow, for RSA and its insured driver, Elizabeth Robertson, had asked Judge O’Connor if he would consider referring the case to the DPP.

Mr McMorrow said Mr Diankenda had lied to doctors, the court and his solicitor and counsel about a third accident and personal injuries claim he had kept hidden.

Judge O’Connor said not only had Mr Diankenda told lies, he had attempted to cover them up in replies to questions.

Mr Diankenda, of Priory Grove, Johnstown, Navan, Co Meath, claimed he suffered whiplash injuries when Ms Robertson drove into the back of his cousin’s car. Mr Diankenda, in the view of the judge, had deliberately refused to answer questions relating to the third claim he attempted to make against AXA.

An order for costs was made against Mr Diankenda.