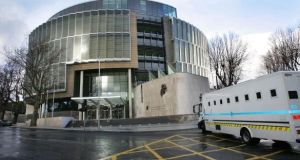 Judge Elma Sheahan said that while Wayne Lynch was not a ‘significant player’ in criminality he was moving equipment during ‘an ongoing feud’ which has claimed many lives.

A Co Louth bread delivery man who feared for his life after racking up a €10,000 drug debt has been jailed for transporting guns and storing drugs during an ongoing crime feud.

Wayne Lynch (37) said he was to get €1,000 off his bill for dropping off the package on behalf of the gang containing the guns and told gardaí: “They don’t take no for an answer.”

Lynch, of Newtown Meadows, Drogheda pleaded guilty at Dublin Circuit Criminal Court to possession of a pistol and ammunition in suspicious circumstances at the Lidl Car Park, Main Street, Tallaght and possession of cannabis herb at his home on July 19th, 2019. He has one previous conviction in 2004 for possession of drugs.

Passing sentencing on Friday, Judge Elma Sheahan said that while it was accepted the accused was not a “significant player” in criminality and would not have used the guns, he was moving the equipment during “an ongoing feud” which has claimed many lives.

Judge Sheahan sentenced Lynch to four-and-a-half years imprisonment, but suspended the final 18 months of the sentence.

They approached the van when it parked in the Tallaght Lidl car park and told Lynch it was going to be searched. They recovered two black handguns and rounds of ammunition inside plastic under the passenger seat. Lynch was arrested and brought to Crumlin Garda station.

Gardaí carried also out a search of his home and recovered cannabis herb valued at €35,606.

Det Gda Dunne agreed with James B Dwyer SC, defending, that Lynch told gardaí he couldn’t talk because he was in fear of his life. He said he never touched the package but knew it was illegal.

When asked by gardaí what he was getting out of it, he replied: “Dead, that’s what I am getting out of this.” Lynch said he had a cocaine habit which had escalated after his father’s death.

Lynch said he had been told to go to a certain location and leave the door of his van open. He returned and the material was there. He told gardaí he was to just drop off the package.

Det Gda Dunne agreed Lynch had been trusted to move the firearms and said he had “a great disguise” in the bread van in order to move items on behalf of the gang.

Detective Garda Kelly Finnegan said Lynch told gardaí he was also holding the drugs in order to get money off his debt. She agreed with Mr Dwyer that at the time of the offence “things were pretty bad in Drogheda”.

Mr Dwyer said Lynch’s cocaine use had been sporadic until the death of his father when he began using larger and larger quantities. He said Lynch deeply regretted his actions and spoke about how he wished he had never become involved in drugs.

He handed in a psychological report and a number of testimonials and letters on his client’s behalf. Mr Dwyer said Lynch had undertaken a number of drugs tests since February and all had been clear. He said his client had started attending counselling and psychotherapy.

Counsel asked the court to take into account his early guilty plea, full and frank admission about his own role, and his co-operation with the investigation.

He asked the court to note Lynch’s role as a “foot soldier” which was an important function but at a lower level. He said Lynch had not been motivated by greed but to get out of addiction.

Mr Dwyer said his client was a hard working family man who, in the throes of addiction, had gone “very, very quickly into a very, very dark place.”