Challenge to EPA licence for Shell 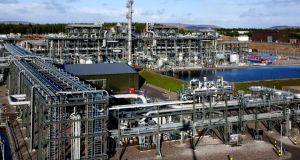 The Shell gas terminal at Bellanaboy, Co Mayo. Court told of concerns over potential impact on people and the environment.

The Environmental Protection Agency sanctioned an “extraordinary” amendment of a “dead” licence for Shell’s gas terminal in Co Mayo months after agreeing to a court order quashing a revised licence, it was alleged at the Commercial Court.

Last January, the EPA purported to amend a licence issued in 2007 even though it had been superseded by another one which in turn was quashed by a High Court order, on consent of the EPA, in October 2013, Conleth Bradley SC said.

The later licence was quashed as it did not comply with the environmental protection requirements of Irish and European law, he said.

The January 2013 amendment was an attempt to “breathe life back into a dead licence” and the EPA’s justification amounted to “absolute nonsense” as there is no authority under Irish or European law for the 2007 licence to be brought back, he said.

Mr Bradley, with Michael O’Donnell, was opening the action by Martin Harrington aimed at quashing the amendment to the 2007 licence, made with a view to ensuring it conformed with a European directive on industrial emissions, and issued to Shell E&P Ireland.   The case, before Mr Justice Max Barrett, is listed to last three days.

‘Nothing underhand’
In opposing the action, solicitors for the EPA insist there was “nothing underhand” about the procedure and, in a letter last March, argued there was no point to the case because a review of the existing licence for the gas terminal is necessary and underway and will involve an Environmental Impact Assessment (EIA).

The solicitors warned Mr Harrington there could be costs implications if his case was not withdrawn.

In other proceedings last October, Mr Harrington, Geesala, Ballina, Co Mayo, won, on consent of the EPA, an order quashing the different revised licence issued by the agency for the gas terminal at Bellanaboy arising from defects in how the EPA carried out an EIA.

Mr Harrington says he is very concerned about the discharges from the refinery and their potential impact on people and the environment.

Solicitors for the EPA said the amendments approved to the 2007 licence are “purely administrative”.