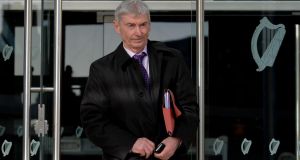 A businessman who took a loan from Anglo Irish Bank in July 2008 to buy 1 per cent of the bank’s shares told the Dublin Circuit Criminal Court he was asked by bank directors Pat Whelan and David Drumm to make the purchase.

Giving evidence in the trial of former Anglo Irish Bank directors William McAteer, Mr Whelan and Seán FitzPatrick yesterday, Seán Reilly said he was invited into Anglo headquarters in Dublin where he discussed the deal with Mr Drumm and Mr Whelan.

Mr Reilly said he got a call from Mr Whelan inviting him to meet Mr Drumm at Anglo headquarters on St Stephen’s Green in Dublin on July 8th and he went in for a meeting the following day. He said Mr Drumm told him the shares were coming under pressure from short-selling and they were “trying to unwind a position”.

They asked if he would purchase 1 per cent of the bank’s shares up to a value of €60 million. He was told the “recourse” on the loan, the amount he would have to pay if the share price collapsed, would be limited to 25 per cent of the value of the loan. “Worst-case scenario if the shares ended up at zero, I would have to pay 25 per cent,” Mr Reilly said.

Mr FitzPatrick (65), Greystones, Co Wicklow, Mr McAteer (63), Rathgar, Dublin, and Mr Whelan (51), Malahide, Dublin, have been charged with 16 counts of providing unlawful financial assistance to 16 individuals in July 2008 to buy shares in the bank, contrary to section 60 of the Companies Act.

Mr Reilly, who had been a long-standing customer of Anglo, said he got no legal advice and the meeting lasted 30 minutes. He said he was assured legal advice had been obtained from Matheson Ormsby Prentice and the “financial regulator and the Central Bank were aware of it”.

“Everyone was aware of it and wanted it done,” Mr Reilly said. He told Mr Drumm and Mr Whelan he would consider the offer and, having spoken to his second in command, he agreed to it the following day.

Asked by Úna Ní Raifeartaigh SC, for the prosecution, why he accepted the deal, he said he had been asked by the bank and felt it wanted him to go ahead with it.

While it was not normally what he would do, he felt that, given the recourse was 25 per cent and the price had already fallen by 75 per cent, it would need to fall another 75 per cent before he would lose money. He thought he might make money.

He signed over power of attorney to an Anglo official because he said he “understood it was necessary for the bank to be able buy shares at the appropriate time”. He also signed a document agreeing to give Anglo 10 days notice before selling the shares and allowing them to nominate a third-party purchaser.

Ms Ní Raifeartaigh took Mr Reilly through the various documents connected with the loan. She highlighted three loan facility letters dated July 10th, 2008, July 17th, 2008, and January 5th, 2009. The letters varied but all said the loan was to provide the borrower with a “multicurrency share-dealing facility”.

Ms Ní Raifeartaigh asked Mr Reilly whether he could have used the loan for shares in other companies. “I hadn’t thought about it,” he replied.

He agreed with Brendan Grehan SC, for Mr Whelan, that he was “left on the hook” for €2.5 million.

In earlier evidence, Colette Quinn, daughter of businessman Seán Quinn, said she did not speak to any Anglo officials about a loan for shares she took out in July 2008. She said she signed the documents she was given but did not recall them. “Can I put a little context around it?” she asked. Ms Ní Raifeartaigh said ‘No’, the rules of evidence were very strict.

Her brother, Seán Quinn jnr, had earlier told the court that documents he signed in relation to the Anglo loans were not signed on the dates that appeared on them. He said he was “very confident” they were not signed in July.

He told the court his position on the loans was “at one with the State”. The security obtained by the bank was obtained “in an illegal manner”, he said, and “therefore should not be enforced”.