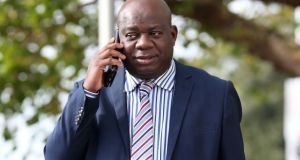 A bus driver has appealed his conviction for careless driving causing the death of a cyclist, claiming the trial judge did not explain legal terms in a way the jury could understand.

Osborn Irabor (60), of French Park, Tyrrelstown, Dublin, was found guilty at the Circuit Criminal Court in 2018 of careless driving causing the death of Mary White (55) on November 17th, 2014.

At the three-judge Court of Appeal on Tuesday, Patrick Gageby SC, for Irabor, said that after the jury members were sent out to begin their deliberations, they returned and asked the judge to “elaborate in layman’s terms” some legal principles.

Mr Gageby said Judge Francis Comerford then re-charged the jury using legal rather than layman’s terms, such as “appreciable”, “due care and attention”, “prudent” and “adverting”.

“The amount of legal language which surrounded this was, it would appear, causing the jury some difficulties,” he said.

Mr Gageby also asked the court to consider what his client did that demonstrated that he fell below the standard of care and attention that would be expected of a reasonably competent driver.

There was, he said, no suggestion that he was using a phone or talking to someone or doing anything else that might have distracted him from driving.

At Irabor’s sentence hearing in November 2018, Judge Comerford heard that at around 9.40pm on November 17th, 2014 the double decker bus driven by Irabor struck Ms White, who was knocked off her bicycle and sustained traumatic head injuries.

She was rushed to hospital where she was pronounced dead two days later. In a victim impact statement the victim’s elderly mother, Peg White, said her daughter had spent 35 years cycling around Dublin and was meticulous on the roads.

Ms White, from Co Meath, said suggestions during the trial that her daughter was at fault were hard on the family, though she accepted defence lawyers were doing their job.

The near head-on collision happened at a T junction on Burlington Road in south Dublin happened as the bus was turning right onto the road Ms White was cycling on.

Judge Comerford said she was a fully responsible road user and that an aggravating factor in the case was the fact that Irabor was a professional driver. The other was the “vulnerability” of cyclists, he said, noting what he said is a mismatch between the size and security of a bus and the vulnerability of a pedal cyclist.

He said that he had no doubt that Irabor did not see the bicycle and he believed the likely reason for this was a blind spot created by the driver’s wing mirror. He said if the bus had stopped at the junction the bicycle would not have been in the blind spot.

Judge Comerford said a mandatory driving ban of four years followed from the conviction and that this would most likely result in the loss of Irabor’s employment. He said this was sufficient punishment but added that “there is no comparison between the loss of Mary White and her family and the burden the ban places on Irabor”.