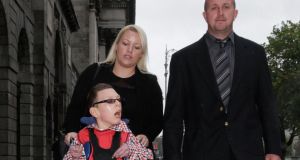 The High Court has approved an interim settlement of €2.75 million in a case taken against a consultant obstetrician by a boy who was catastrophically brain injured before his birth.

James McCarthy (12), who cannot walk, talk or sit up on his own, has settled his High Court action for damages over injuries he suffered in the final stages of his mother’s pregnancy.

James from Derrygrath, Clonmel, Co Tipperary was delivered by emergency caesarean section at 33 weeks when a scan showed his identical twin had died in the womb. His senior counsel told the High Court the boy was the “victim of the most appalling injuries”.

At the start of the case, the High Court said the proceedings against the hospital and the Health Service Executive (HSE) could be struck out and the matter was going ahead against Dr Howard who had admitted liability.

It was claimed that neither James’s condition or that of his mother was investigated, monitored, diagnosed or treated properly or at all so that James was born with severe disabilities. Senior counsel John O’Kelly said Ms McCarthy was told she was expecting twins in April 2001 and was referred to St Joseph’s Hospital for ante-natal care under the care of Dr Howard.

Ms McCarthy was not seen by Dr Howard, but by his registrar who expressed concern and wanted to admit Ms McCarthy after a scan on November 13th, 2001. Counsel said the registrar consulted with Dr Howard who did not believe she should be admitted and Ms McCarthy was asked to come back in one week.

On November 20th, a scan showed that one of the twins had died and a caesarean was performed later that day.

Ms McCarthy previously told the High Court she got no opportunity see her dead baby before he was transferred to another hospital.

“Nobody explained. It is like everybody went silent,” she said.

The next day she said Dr Howard told her ” these things happen” and to concentrate on James. Ms McCarthy said she had not met him prior to that day when he came to visit her after James was delivered.

She said when James was discharged from hospital in December of that year, she and her partner James Cooney thought there were bringing home a healthy baby apart from him being born premature. The baby cried constantly and it was around his first birthday that they learned he had cerebral palsy and over time discovered the severity of his disability.

In court today, Mr Justice Kevin Cross wished the family and James well as he approved the interim settlement.

Outside court, Ms Mc Carthy and Mr Cooney said in a statement that their lives had been torn apart on November 20th, 2001.

“James is a wonderful son, brother and grandson. We also cannot forget his twin Daniel who we never got to hold. This is the last place we wanted to be. We were left with no choice but to come here to court even though liability was admitted last month by Dr Howard.”