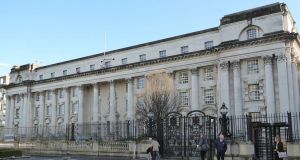 Terminations are only legal in Northern Ireland to protect a woman’s life, or if there is a risk of serious damage to her well-being.

A woman who travelled to England to terminate a pregnancy with a fatal defect is a victim of Northern Ireland’s abortion laws, the Court of Appeal was told in Belfast on Wednesday.

Nathalie Lieven QC was responding on the third day of the court battle over the current abortion regime. Unlike other parts of the UK, terminations are only legal within Northern Ireland to protect the woman’s life, or if there is a risk of serious damage to her well-being.

Last year, the High Court ruled the failure to provide exceptions to the near-blanket ban for cases of fatal foetal abnormalities (FFAs), and victims of rape or incest, breaches private and family life entitlements under Article 8 of the European Convention on Human Rights (ECHR).

In a case brought by the Commission, Mr Justice Horner also made a formal declaration that the legislation is incompatible with the UK’s obligations under the Human Rights Act. His decision is now being appealed by both the Department of Justice at Stormont and the Attorney General.

The Commission is also mounting a cross-appeal in a bid to have the regime further declared in breach of Articles 3 and 14 of the ECHR prohibiting degrading treatment and discrimination.

Legal action began after the Department launched a public consultation on amending the criminal law. That process concluded with a recommendation for new legislation dealing with cases of FFA. But with no proposed changes covering pregnancies resulting from sexual crime, the Commission insisted the consultation does not go far enough. It was also seeking to have terminations legalised in cases of rape or serious foetal malformation.

As part of the appeal against Mr Justice Horner’s landmark verdict, judges were told the case lacked a required victim. But Ms Lieven highlighted the example of Ms Ewart – a woman from Northern Ireland who travelled to England for an abortion after learning her unborn baby had no chance of survival.

She told the court: “If one takes the failure to change the legislation plainly there are and there will be victims. Ms Ewart is a victim, she is a victim now and the facts as recorded in her two affidavits and unchallenged.

“She has been denied an abortion in circumstances that we say are breaches of Articles 3, 8 and 14. She is in a position of risk; hopefully a very small risk but a small risk of being in the same situation again.”

Turning to the category of sexual crimes, Ms Lieven argued that any woman or girl in Northern Ireland who becomes pregnant due to rape or incest and wants an abortion is a victim. “It isn’t possible to narrow the class further than that,” she said. “There’s a very pernicious side to the Attorney General’s argument that if you need an actual victim of sexual crime who has sought an abortion in Northern Ireland and been refused, the chances of such a person coming forward and taking an action is minimal.”

She cited the example of a 13-year-old girl sexually assaulted and made pregnant by a relative. “It’s simply inconceivable, it’s disingenuous to suggest such a girl would be protected by an anonymity order when she is the victim of family rape,” Ms Lieven contended. “It means such a victim simply cannot get access to justice.”