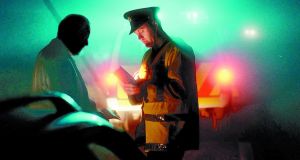 Most of the people referred to the course are convicted of having no insurance (104 referrals) or no license (82 referrals) or a combination of both. File photograph: Frank Miller/The Irish Times

More than one-quarter of motorists convicted of offences such as drink-driving and driving without insurance, who are sent on road-safety educational courses by the courts, are failing to complete the programmes.

Last year 131 people were referred to the Restorative Road Safety Programme having been convicted, the busiest year of the pilot programme since it was established in 2016.

Under the programme, run by charity Restorative Justice Services, convicted motorists take part in one-to-one and group sessions with the aim of making them consider the consequences of breaking road traffic laws.

This includes safety briefings with gardaí from the traffic unit, lectures from HSE staff on drink- or drug-driving and visits to the National Rehabilitation Hospital to see consequences of unsafe driving.

Drivers also have to make a donation to charity and complete a “reflective” account of the course for the judge, outlining their regret and any insight they may have gained into their offending.

Successful completion of the course is taken into account by the sentencing judge when the case returns to court and is likely to lead to a less severe punishment.

Last year 37 motorists – 28 per cent of those referred – failed to complete the programme. There were 76 successful completions and another 16 people still going through the course at year end.

A total of 14 per cent of those referred to the programme also failed to turn up in court for their next hearing, resulting in arrest warrants being issued. In 2017, 22 of the 87 motorists referred failed to complete the course.

On Sunday, Ireland marked the Day of Remembrance for Road Traffic Victims, a UN-backed initiative commemorating those who have died on Irish roads. So far this year 126 people have been killed on the State’s roads, six more than in the same period last year.

Peter Keely, a manager at Restorative Justice Services, said there are many reasons why people choose not to complete the road safety course.

“Some don’t see the value in participating,” he said. “Sometimes it’s to do with them dealing with particular challenges, whether it’s mental health issues or dependency on alcohol or drugs. There also may be cultural behaviours that may have been instilled in them. That sometimes goes with the older participants in particular.”

Most of the people referred to the course are convicted of having no insurance (104 referrals) or no licence (82 referrals) or a combination of both. There were 16 referrals relating to dangerous driving and six relating to careless driving.

Mr Keely said referrals are a matter for the court but that he would like to see a greater concentration on offences like dangerous driving or drink-driving, rather than “so-called administrative offences” like driving without insurance.

“We’re trying to sharpen the focus.”

The figures show successful completion of the programme is by no means a guarantee of charges being struck out. Of the 115 people who went through the programme in 2018, only seven had their charges struck out; 21 motorists received a fine and driving disqualification and five were sent to prison.

More than 87 per cent (114) of motorists referred to the programme are male. The largest age category was between 18 and 20 (22 per cent of referrals).