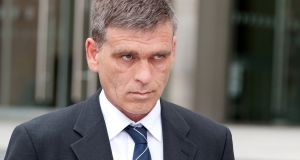 Co Clare man Colm Deely is set to appeal his conviction for the murder of a 43-year-old woman in March, 2011. File photograph: Collins Courts.

A Co Clare man is set to appeal his conviction for the murder of a 43-year-old woman, the Court of Appeal heard on Monday.

In March, 2011, the body of Deirdre McCarthy (43) was found on Fanore beach four days after she went missing.

More than two years later, in June, 2013, at the Central Criminal Court in Dublin, Colm Deely (43), of School Road in Ballyvaughan, was found guilty of murdering Ms McCarthy between 11pm on March 27th, 2011, and noon the following day. Deely had denied the charge.

During the trial, the court heard that after Ms McCarthy’s body was found, Deely had attempted to take his own life by stabbing himself in the stomach and was hospitalised.

Deely told gardaí they were “fooling around” in Ms McCarthy’s bed and put his hands around her neck but did not mean to kill her.

He claimed Ms McCarthy started laughing at him, that she was blackmailing him for money saying that she would tell Deely’s wife and children.

The appeal hearing is listed for June 16th.