Church swept for explosives ahead of David Byrne’s funeral 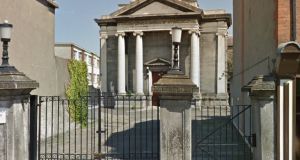 Gardaí have carried out a sweep for explosives at the church where the funeral Mass of gang figure David Byrne is due to take place this afternoon.

The sweep, which involved the Garda Dog Unit, was part of a major security operation that will run for the week.

The operation aims to minimise the opportunity for further gangland violence in Dublin following the murders of Byrne at the Regency Hotel in Drumcondra last Friday week and Eddie Hutch (59) four days later.

Byrne was a member of the international drugs cartel led by Dubliner Christy Kinahan which is based in southern Spain in the Marbella area but has members in Ireland and supplies the Irish drugs market.

Sources said Kinahan, a convicted fraudster and drug dealer, arrived in Dublin yesterday for Byrne’s funeral. The same sources said he was with his son Daniel Kinahan, who is believed to have been the primary target of the gunmen who killed Byrne and wounded two other men last Friday week.

Byrne, a 34-year-old father-of-two, was waked as his parents’ home on Raleigh Square, Crumlin, on Sunday ahead of his funeral Mass at St Nicolas of Myra, Francis St, Dublin 8, at 12.30pm on Monday.

His burial is scheduled for Mount Jerome Cemetery, Harold’s Cross, after the Mass.

Gardaí carried out checkpoints at all routes in and out of Raleigh Square on Saturday and Sunday.

A major security operation was also carried out on Sunday at the church on Francis Street and the surrounding streets.

The dog unit searched for explosives amid fears that devices may have been planted ahead of the funeral, to either explode or be discovered and force the evacuation of the area and the disruption of the funeral.

Garda sources said that while the Continuity IRA had released contradictory statements last week about the group’s involvement in the gun attack that claimed Byrne’s life, it was still possible they were involved in some way.

The same sources said that AK47s were used in the attack and that it was carried out with paramilitary efficiency.

They said they believed dissident republicans may have been involved in the supply of the weapons or training the attackers.

That attack, which involved at least five gunmen, was carried out by associates of Gary Hutch, from Dublin’s north inner city, who was shot dead near Marbella, Spain, last September.

A senior criminal linked to Hutch has worked on major crimes with members of the Provisional IRA in the past, some of whom are now active in dissident circles.

Byrne was a member of the Spain-based gang led by Dubliner Christy Kinahan.

The sources said the possibility dissidents were aiding Gary Hutch’s associates in taking on Kinahan’s gang could not be dismissed.

They said either side in the feud could readily access pipe bombs and that this factor must inform the policing operation for the funerals.

As well as the Garda Dog Unit’s activities on and about Francis St on Sunday, gardaí were monitoring those in the area and stopping and speaking with motorists.

The operation was supported by armed members of the Emergency Response Unit (ERU), who were visible in some other parts of Dublin over the weekend, including Crumlin and the north inner city.

Some ERU members have been diverted away from security operations along the Border to deal with the worsening security situation in Dublin.

Relations between the Hutch and Kinahan factions have deteriorated since the Kinahan gang, of which Gary Hutch was once a member, accused him of being an informer about two years ago.

Members of the Hutch family made a payment to the Kinahan gang and pledged that Gary Hutch would step away from the drugs trade in an apparent bid to save his life.

However, Hutch was shot dead in Spain last September and further demands for money were made on his family by the Kinahan gang.

A number of efforts were made to shoot dead a leading criminal linked closely to the Hutch family, at least one of which occurred within the last eight weeks.

Last Friday week some of Gary Hutch’s associates attacked a boxing tournament weigh-in in the Regency Hotel with the intention of killing members of the Kinahan gang, including Christy Kinahan’s son Daniel Kinahan.

David Byrne was shot during the attack and two others were wounded.

Eddie Hutch (59) was then shot dead at his home on Poplar Row, Dublin 1, last Monday.

His murder was seen as retaliation for Byrne’s killing.

However, they said it was less certain whether the attack was sanctioned by the gang’s leadership.

The situation has made necessary the security operation for Byrne’s funeral.

Similar precautions are expected when Eddie Hutch, a father-of-five who worked as a taxi man and was not involved in gangland crime, is buried later in the week.