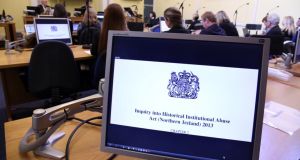 The verdict could have wider funding issues for the ongoing Historical Institutional Abuse Inquiry as it examines evidence from up to 360 witnesses. Photograph: PA

A child abuse victim was unfairly denied legal representation at a major inquiry into alleged historical offences at care homes, a High Court judge has ruled.

Mr Justice Treacy held that a bar had effectively been erected against her and others who claim they suffered sexual and physical assaults. He is now set to quash the decision by a former judicial colleague to reject her request for publicly funded lawyers.

His verdict could also have wider funding issues for the ongoing Historical Institutional Abuse Inquiry (HIA) as it examines evidence from up to 360 witnesses. But the judge stressed: “The consequences in terms of costs do not remove the public law necessity for legal representation out of public funds if that is what fairness requires.”

The woman who brought the challenge claims she was abused by a “very high-profile figure”. She issued judicial review proceedings after HIA chairman Sir Anthony Hart – himself a retired High Court judge – refused her application for funding for legal representation at the public expense.

It was claimed that his decision was unlawful and will give an unfair advantage to alleged perpetrators. Those accused of carrying out abuse and the institutions under investigation have been permitted legal representation.

The inquiry in Banbridge, Co Down, was set up in 2013 to investigate child abuse in residential institutions in Northern Ireland over a 73-year period, up to 1995.

It has so far heard from nearly 100 victims and survivors of abuse, most of whom were in the care of the Catholic church at homes in Derry and Kircubbin in Co Down. Others were part of a state approved child migrant scheme to Australia.

The focus has now shifted to the former Nazareth House and Nazareth Lodge in Belfast. The woman behind the legal challenge claims she suffered years of physical, sexual and mental abuse while in the care of the Sisters of Nazareth. She also separately alleges that she was targeted by an unidentified high-profile figure.

Counsel acting for her in the judicial review application claimed the chairman’s decision involved a fundamental unfairness. Sir Anthony had concluded it was not in the public interest for her to have legal representation at the public expense because she was not likely to be criticised during the inquiry or in its report.

Further reasons included the cost to public funds and her lack of “core participant” status. But delivering judgment, Mr Justice Treacy asked: “Why should the perpetrator be placed in a materially more advantageous position in terms of legal representation, especially in circumstances where he already enjoys more participative rights to safeguard his interests?

“Can this objectively and as a matter of public law be regarded as fair?” He added: “I consider the chairman set the bar too high, especially bearing in mind the high stakes for all concerned.”

The judge concluded that in rejecting the application for legal representation at the public expense the inquiry’s decision fell into public law error.

Mr Justice Treacy also stressed that it would be up to the HIA to reconsider the case and determine what level of representation is required.

After making his ruling, a man in court claiming to be a victim stood up and asked for the inquiry to be suspended until the issue is finally resolved.

The judge told him that was not part of the relief being sought in the case. He said: “It seems to me that situation doesn’t arise at the minute, but if need be it’s something that can be returned to in due course.”