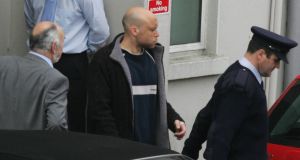 Mark Nash (centre) is taken from the Bridewell Court in Dublin after he was charged in October 2009 in connection with the killings of Sylvia Shields and Mary Callinan in Grangegorman in 1997. File photograph: Cyril Byrne/The Irish Times

For months after the mutilated remains of Mary Callanan (61), and Sylvia Sheils (60), were found in sheltered accommodation for psychiatric patients in Grangegorman, Dublin, on the morning of March 7th, 1997, the Garda investigation failed to throw up even one genuine suspect.

This was despite massive resources being committed to the inquiry because senior gardaí feared the killer was sexually depraved and was likely to kill again, mutilate and even eat his victims’ body parts.

A number of appeals were made on the RTÉ Crimecall programme.

Two men were named by a number of callers as burglars operating in the Grangegorman area.

When gardaí went to speak to them both they said they had heard a 24-year-old robber and drug user from Tallaght, named as Dean Lyons, implying he had been involved in the killings.

It was the breakthrough the by-then desperate gardaí were waiting for.

On the morning of July 26th, 1997, gardaí went to a Salvation Army Hostel in Dublin’s city centre, where they knew a homeless Lyons was staying.

They found him there and said they wanted to speak to him about the Grangegorman killings.

He agreed to go to the Bridewell Garda station in Dublin’s north inner city, but initially was not arrested. That was at 9am.

By 1.30pm, Lyons broke down under questioning, and made an admission to the killings.

He was arrested, held overnight and charged the next day with Ms Callanan’s murder, but with the expectation he would also face charges in the weeks or months ahead for killing Ms Sheils.

The narrative for the Garda was clear and simple - the pressure was off.

Gardaí, it appeared, had their man. The families of the unfortunate victims would get justice, and a wild killer who attacked elderly women and mutilated them for sexual gratification, had been locked up.

However, the afterglow of this breakthrough was not to last very long.

Both Dubliners, they had moved to Roscommon under a rural settlement scheme.

British man Mark Nash was arrested for the killings on the same day.

The 24-year-old was in a relationship with Sarah Jane Doyle, the 19-year-old sister of Catherine Doyle.

Under questioning about the Doyle killings, which he was convicted of and has served 18 years in prison for, Nash told gardaí he had carried out the Grangegorman killings.

He supplied a level of detail about the injuries inflicted on the women that only the killer would know, and even drew maps of the area and crime scene for gardaí.

Now the gardaí had a serious problem.

If Mark Nash, now a proven killer with a propensity for extreme violence, had murdered Ms Callanan and Ms Sheils, how had Dean Lyons made a detailed admission to the crimes and been charged?

There followed a prolonged period of chaos during which Lyons initially maintained he was a killer, even with prison officers, while on remand on jail.

He continued to tell his family, who did not believe him, that he was the killer.

Lyons, a petty criminal and heroin user who had drifted into homelessness, was of low intelligence bordering on special needs.

He had a history of being a fantasist, and his family saw his admission to the Grangegorman murders as a continuation of his past behaviour.

Reviews of the case by a Garda team and a consultant psychiatrist eventually poured doubt on the Lyons admissions, but only after the investigating team lodged their file with the DPP insisting Lyons remain charged with Ms Callanan’s murder and be further charged with killing Ms Sheils.

In April 1998, some 13 months after the murders, the charge was dropped against Lyons, who was then released.

He would die in the UK two years later, having served a prison sentence there on another matter.

To further complicate matters for the Garda, Nash withdrew his admission just one month after making it.

In October 1999, after having decided three months earlier to charge Nash with the murders, the DPP decided it could not proceed with such action.

On top of Nash’s withdrawal, the fact another man had made an admission to the crimes created a major obstacle to pursuing Nash.

All the while, the family of Ms Callanan and Ms Sheils were still waiting for justice.

Their solicitor Michael Finucane repeatedly called for a State inquiry into the entire affair.

The then minister for justice Michael McDowell dismissed that idea, but a Garda working group on the matter was established.

It was followed by an apology to the Lyons family three years later, and in February 2006 a commission of investigation under George Birmingham SC was established.

It concluded the following September that gardaí did not frame Dean Lyons.

Instead, it said he was a fantasist who gleaned information from the questions gardaí put to him and then put that information into his statement of admission, making it seem plausible.

In a bizarre twist to the saga, the garda who led the questioning of Lyons when he made the admissions, Det Sgt Robbie McNulty, leaked Mr Birmingham’s draft report to journalist Mick McCaffrey.

He believed it vindicated him and wanted that news to break as fast as possible, so he leaked the draft report rather than waiting for the commission to publish its final report.

Though he was cleared of the accusation that Lyons had been framed, Det Sgt McNulty was prosecuted for leaking the report and convicted.

He had retired from the Garda by that time.

The Garda continued to investigate the case of the Grangegorman killings with Mark Nash as the only suspect.

In October 2009, still serving life for the 1997 Doyle killings in Roscommon, he was charged with the murders.

The State was by that time in a position to charge Nash with the Grangegorman murders after a major breakthrough with the DNA evidence.

When Nash killed the Doyles in August 1997, Sarah Jane Doyle gave a statement to the Garda and gave them permission to enter the flat she shared with Nash, on Clonliffe Road in Drumcondra, Dublin 3.

When they went there, a velvet pinstriped jacket was seized, along with a number of other items.

On a button on the jacket sleeve was found a blood stain. With the techniques available in 1997, a DNA profile could not be generated from it.

By 2009, forensic science had advanced and when the jacket was tested again, the blood stain yielded the DNA profile of both women killed in Grangegorman.

Gardaí knew Nash possessed the jacket at the time because it was seen hung over the back of his seat in photographs taken at a quiz in the GPO he had attended on March 6th, 1997, in the hours before the Grangegorman killings.

Protracted legal efforts in the intervening years to prevent the prosecution going ahead failed and he was finally put on trial last month.