Can Ireland really prepare for a terrorist attack?

Decisive action, tight co-operation between services the best ways to deal with threats 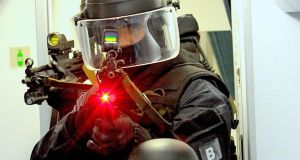 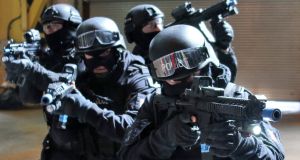 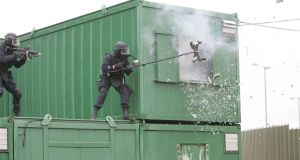 In the wake of the Paris terrorist slaughter and the subsequent counter-terrorist assault by police in St Denis, official Irish responses have been a mix of soothing words of reassurance combined with urgings to, in effect, stay quiet, lest we draw attention to ourselves.

However, the post-Paris threat facing all western countries, not just France, featured prominently yesterday morning at the start of a week-long training course at the Defence Forces Ordnance School in the Curragh, Co Kildare.

The course is sponsored by the Defence Against Terrorism Programme of Work of the North Atlantic Treaty Organisation, to which Ireland is connected through the Partnership for Peace programme.

Organised long before the Paris attacks, it was attended by up to 20 members of the Defence Forces and Garda Síochána, plus members of the security forces from several other European countries, including Germany, and also the United States.

In the past, such gatherings – which draw together those who will be in charge if emergencies occur – tended to focus on responding to so-called lone wolf, or random shooter, attacks known as MTFAs (marauding terrorist firearms attacks).

But mass killings, such as the 2008 co-ordinated attacks in Mumbai, India, in which 164 people died, and the 2013 attack on the Westgate shopping mall in Nairobi, in which 175 people died, prompted revisions.

No one claims to have all the answers since those attacks, and lessons are still being learned by all security forces, as was shown in Paris, particularly since the Charlie Hebdo killings in the city last January.

French forces have been training regularly and indeed, on the morning of the Paris attacks, the French emergency medical services (Samu), together with police and fire services, had been stood up for a simulated multi-site exercise that day.

The death toll was as high as it was despite that greater vigilance, the presence of already deployed armed officers and the forceful response by the authorities.

The question is: how much worse might it have been?

“Are we ready here [in Ireland]?” asked a security source familiar with this week’s course, “No, is the simple answer. Look at what the M50 [recent crash and road closure] did in terms of chaos.”

The traditional response to an MTFA-type attack is to get an armed unit to secure a site or building from the outside and contain what is happening inside, while waiting for other emergency services to arrive.

In Ireland, this means, first, uniformed and armed plain-clothes gardaí, followed rapidly by members of the Garda Emergency Response Unit, the most heavily armed counter-terrorist grouping within the Garda.

“The problem,” said another source, interviewed separately (neither source wished to speak on the record), “is that the old response won’t work and the casualty rate will spiral. The lone campus wolf in America, that’s one scenario.

“But a team, two or three teams, what then? That second [terrorist] team they took out in St Denis, were they there waiting to go? This weekend maybe? Were they going to hit a memorial service [for victims of the first attacks]?” he said.

The Bataclan theatre attack in Paris offers a new model. Multiple locations are hit elsewhere to sow confusion, while at one key location – the main target – killers lock themselves in and commit mass murder systematically.

“If you don’t train how to respond to that,” said the first source, “the other guys get to operate longer, killing and killing while you don’t kill them. Are we prepared to allow that? If we are, okay.

“But let’s talk about it and make sure we’re fine with that, accepting that if it does go off, it’s going to be bloody and long,” said the source, who spoke to The Irish Times only on condition of anonymity.

In London last June, paramilitary Metropolitan Police and other branches of the emergency services held a large exercise, titled Operation Strong Tower, which centred on a simulated terrorist attack in the Aldwych district.

In 2012, the UK also initiated Jesip – the Joint Emergency Services Interoperability Programme – which aims to improve the ability of multiple emergency services to work together in a crisis.

The result was the largest and most successful joint training initiative across the UK’s emergency services, which has left in place a small standing team to maintain levels of co-operation and update training and procedures as required.

“The best way to prepare and test yourself is to run an exercise,” said the first source, lamenting that combined services simulated exercises are not being done in the Republic.

“Are we saying ‘We’re the brightest people in Europe’, because we’re not running any?”

Expertise grows in training: “You need to have everybody talking to each other, talking the same language, using the same or compatible equipment, understanding the chain of command, [led] by ‘the golden commander’.”

Effective “across-the-bonnet briefings” in the opening moments of the State’s reaction to a terrorist attack are the key: rivalries or barriers, if they exist, have to have been broken down during joint training exercises.

Responding to such an outrage here, if it occurred, the Emergency Response Unit now has the upgraded Heckler and Koch 416 assault rifle better to meet the challenge presented by the AK47 - still the terrorists’ weapon of choice and the one used in Paris.

The training done already by the ERU is much praised – much of it with the Army Ranger Wing, the Defence Forces’ special services unit, whose reputation stands high among its international counterparts.

However, it is the strength of the relationship between these two organisations and the rest of the emergency services during a major terrorist incident – chiefly the Fire Service and the Ambulance Service – that concerns some.

So far, the authorities have been asked to keep quiet about training and preparedness for a major terrorist attack for fear of alarming the public and betraying capabilities to any potential attackers.

But does open talk about preparing to deal with attackers intent on mass slaughter encourage such an event? Both sources are emphatic in rejecting this view.

“Bulls**t. Bulls**t,” said the first source. “If you are anti-war, you go to Shannon. Okay. That’s fine, but what happens in Shannon? It’s a ‘touch-and-go’ operation. They land and take off, that’s all.

A more likely point of interest to anyone wishing to harm Ireland and any perceived enemy here would be “the greatest concentration of [US] corporate interests outside America in the world,” as the first source put it.

“By training to counter terrorism, you actually attract terrorism?” he responded, rhetorically. “To me, that’s not logical. We are [already] a soft target – Temple Bar, Google, other American corporate interests?”

The latest Curragh training course includes threat assessment, weapons types and use, tactics, force readiness – what works, what does not? case studies, and demonstrations, including room clearances and booby traps.

It also covers media control (and monitoring of social media), and possible out-of-doors simulations in the Curragh or another, heavily used, public location.

Training, both sources argue, is the difference between a crisis and catastrophe.