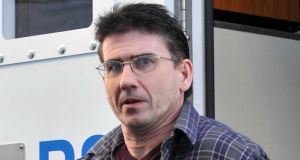 A British citizen who was found on a boat carrying more than €400 million worth of cocaine off the Irish coast has lost an appeal against conviction.

Christopher Wiggins (48) with an address at Estepona, Malaga, Spain, pleaded guilty at Cork Circuit Criminal Court to possession of cocaine for sale or supply on November 5th, 2008 when the boat Dances With Waves was boarded 250km off the Irish coast.

Three British citizens including Wiggins were on board the boat when 1.9 tonnes of cocaine worth more than €400 million were found by Irish authorities. All three men pleaded guilty to possession for sale or supply.

Wiggins was sentenced to 10 years imprisonment by Mr Justice Carroll Moran on May 8th, 2009.

Representing himself, Wiggins moved to appeal his conviction in May.

However, President of the Court of Appeal Mr Justice Seán Ryan said on Friday the court could not allow Wiggins to re-open his decision to plead guilty in circumstances where he did so with full legal advice and obtained the benefit of a reduced sentence following a plea in mitigation.

By pleading guilty, Wiggins gave up the possibility of being acquitted at trial, Mr Justice Ryan said.

It was a complex case with many things that might have gone wrong for the prosecution. There might well have been an issue of law in relation to the boarding of the vessel and the arrest of the sailors.

The legislative labryinth was going to be difficult to explain to the jury, the judge said.

However, Wiggins could not show that his decision to plead guilty was invalidated by erroneous advice, the judge said. The threshhold was obviously high and Wiggins had not surmounted it.

One of Mr Wiggins’ co-accused, Philip Doo (58), from Devon in England, withdrew his appeal before proceedings commenced.