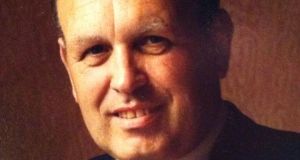 An undated handout photo of Supt Bob Buchanan who was gunned down, along with Chief Supt Harry Breen, on March 20th, 1989, in south Armagh. Photograph: McCartan Turkington Breen/PA Wire.

The family of Harry Breen have said all their fears have been realised by the Smithwick Tribunal’s findings.

Lawyers for the respected officer’s widow June, now in her 70s, and their children, David and Gillian, said the findings of Garda collusion are a truly remarkable expose and indictment of wrongdoing.

They said the officer and his trusted colleague Supt Bob Buchanan were betrayed by their counterparts in An Garda Síochána.

“An Garda Síochána as a body was held in high regard by Chief Superintendent Breen. He enjoyed a good professional working relationship with various members over the years of his service,” solicitor John McBurney said.

“It is tragic that he was betrayed in the manner established by Judge Smithwick whilst he was engaged in significant policing endeavours of importance to the RUC and An Garda Síochána and the jurisdictions both served.”

The lawyer for the Breens said the Smithwick report details in the most stark and dramatic fashion the failure by state systems to address the allegations of collusion.

“The family of Chief Supt Breen and many others held deep fears and concerns about the circumstances surrounding the tragic murder and his esteemed colleague Bob,” Mr McBurney said.

“Those abiding fears and concerns have now been fully realised with collusion firmly established.”

The Breens said they deeply appreciated the courage of some Garda officers and members of the security forces in bringing key evidence to the tribunal.

They asked for time to reflect on the extensive findings the tribunal has uncovered.

“The report has brought enormous clarity to what has been a very shrouded set of circumstances for so many years,” Mr McBurney said.

“The knowledge gleaned from the work of the tribunal has brought significant consolation to the family as they come to terms with the treacherous realities, now laid bare, which surrounded the dreadful murder of their loved one.”

Supt Buchanan’s son, William Buchanan, described the findings as “both incredible and shocking” and said they confirmed the existence of a mole in Dundalk Garda station.

“I know that a ‘mole’ theory has been in the background from the outset but this was very quickly discounted by the then chief constable of the RUC (Sir John Hermon) and the Garda commissioner at the time of the murders,” he said.

“The findings of Judge Smithwick are both incredible and shocking and confirm the existence of a mole in Dundalk station — this led to my father’s death.”

“They have been untiring in the performance of their task and we trust the State will take cognisance of the findings and learn valuable lessons for the future.”