Bray Boxing Club murder: When ‘the wrong person’ is shot

Bobby Messett was not the target. Another assassination ends in the death of an unintended victim 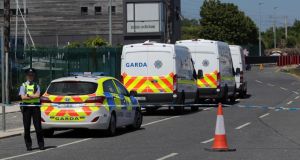 Larry Dunne, the man most widely associated with introducing heroin to Ireland, was being led away to begin a lengthy jail sentence in 1983 when he turned to gardaí and said: “If you think we were bad, wait till you see what’s coming next.”

What was coming next is what happened in Bray on Tuesday. Even by the standards of modern Irish crime it was a savage attack. The apparent target, the boxing coach Pete Taylor, was hit in the arm and chest. The gunman also shot Bobby Messett in the face, killing him instantly, and hit Ian Britton in the leg, leaving him with serious injuries.

3 No Irish howlers, but Prince Philip’s body language with McGuinness told a story

9 How to build a modern man: Helping boys to grow up happy

11 Warmer weather to coincide with lifting of 5km travel restrictions

15 Prince Philip: Irascible, possibly unfaithful – and, since The Crown, so incredibly glamorous

17 I have renovated a property. Can I claim my labour against capital gains tax?

20 Leadership at issue as Fianna Fáil eyes prospects after pandemic

21 Even better than the real thing: Escapist holidays in Ireland

22 What Bobby Sands means to me: ‘The hunger strikers chose to die. Daddy didn’t’

28 Ireland’s Generation Rent: ‘After 12 years renting, I’d like my own front door’

29 Michael J Fox: ‘In the wheelchair, I’m luggage. No one listens to luggage’

30 The Mary Wallopers: ‘Folk was never supposed to be safe’

31 Lena Dunham: ‘There’s so much judgment around bigger bodies, like bigger women are stupider’

32 Ross O’Carroll Kelly: ‘The old man has promised to stop acting the dick’

33 Belgium, France, Italy, US and Canada among 16 countries added to mandatory quarantine list

34 Harry and Meghan: The union of two great houses, the Windsors and the Celebrities, is complete

37 ‘i dream i am with you’: letters, language and Nora Barnacle

39 Bobby Storey: The IRA's planner and enforcer who stayed in the shadows

40 Fintan O’Toole: I got a mortgage at 24 – unthinkable for today’s young adults