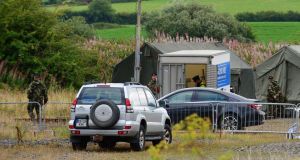 The scene at Balmer’s Bog near Dundalk in Co Louth where ther search for missing teenager Ciara Breen is taking place. Members of the Defence Forces have joined gardaí in the ongoing operation. Photograph: Ciara Wilkinson.

An army bomb disposal team was called to a bog in Dundalk, Co Louth on Thursday after a suspicious device was discovered during the search for a missing teenager.

The Defence Forces confirmed that bomb component parts had been found. They were made safe by controlled explosion.

The items found are understood to have been in situ for some time.

Ciara Breen was 17-years-old when she disappeared from her home at Bachelor’s Walk in Dundalk in the early hours of February 13th, 1997.

Two weeks ago gardaí began to search 16 acres of marshland off the Ardee Road known as Balmer’s bog, which is 1½km west of the town centre and Ms Breen’s home.

More than 60 members of the Defence Forces, based at Aiken Barracks in Dundalk, have joined the search effort this week.

The search will resume on Friday morning.

It is 18 years since Ms Breen was last seen and gardaí began a search of the overgrown marshland area for her remains about two weeks ago.

A senior garda source said a request was made for help from the Defence Forces because “the army is a resource and we felt they could assist us because of the search techniques they have that would be useful in the terrain that faces us.

“The army was more than willing to assist us and we have been very impressed with them,” the source added.

The search operation is being overseen by a forensic archaeologist.

Gardaí also commended members of the public who have come forward after a renewed appeal for information about what happened to Ms Breen was made in the media last November. Two people had come forward with separate historic sightings of Ms Breen on the night she went missing.

The Garda source said: “We are making a concerted effort to find Ciara but there are still people in Dundalk with information that could assist us and we would appeal to them to do the right thing and come forward.”

Two men have been arrested as part of the investigation but both were released without charge.

Ciara was last seen by her mother Bernadette at the family home. She explained at the time they had both gone to bed just after midnight. “I got up at 2am to go to the toilet and I looked in (her bedroom) and she wasn’t there. She didn’t take any money or clothes with her. It is as if she went to meet somebody and did not get back.”

Ms Breen’s case was part of Operation Trace which was established by the Garda in 1998 to determine if there were links between the disappearances of a number of women in the Leinster area.

No connection was found and none of the women’s remains have been discovered nor has anybody been charged with any crime in relation to their disappearances presumed murders.

1 Coronavirus: From midnight Dublin will move to level three until October 10th - Taoiseach
2 Life in Level 3: What will happen under new restrictions in Dublin?
3 Wife not entitled to deceased husband's entire estate, High Court rules
4 Michael McDowell tells Seanad he has ‘no confidence’ in NPHET
5 Coronavirus: NPHET letter to Government warns of ‘extremely critical juncture’ for Dublin
Real news has value SUBSCRIBE