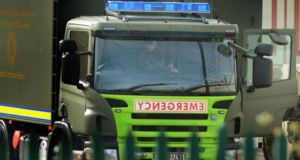 File photograph of an Army bomb disposal team. The Defence Forces today deployed the Explosive Ordnance Disposal team in response to a request from the Garda after a suspect device was found in a private residence on the Howth Road, Raheny.

The Defence Forces deployed the Explosive Ordnance Disposal (EOD) team in response to a request from the Garda after a suspect device was found in a private residence on the Howth Road, Raheny.

The team arrived on the scene at 2.25pm and a cordon and traffic restrictions were put in place for public safety.

The device was rendered safe in situ without the need for a controlled explosion and was moved to a secure military location for further technical examination and testing. The scene was declared safe at 4.10 pm.

It has been confirmed that the device contained explosive materials following further testing.

Its component parts will be handed over to the Garda to assist in its investigation into the incident.