Teenager Phoebe Clawson was trapped under vehicle after incident in Ardoyne, Belfast 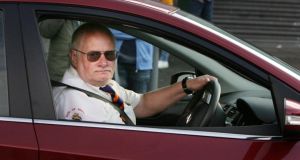 A prominent Orangeman has been granted bail after appearing in court accused of attempting to murder two people knocked down by a car during riots in Belfast.

John Aughey (61), from Brae Hill Park in the Ballysillan area of the city, was granted bail on strict conditions after appearing in court accused of trying to kill Phoebe Clawson and Roisin McGlone in the nationalist Ardoyne area in the midst of disturbances on Monday night.

After the collision, Ms Clawson (16), was trapped under Mr Aughey’s car and police and residents had to lift and flip it off her.

She is in a stable condition in hospital having suffered multiple broken bones. Ms McGlone’s injuries were not as serious.

The incident on the Crumlin Road happened as loyalists rioted in the nearby unionist Woodvale area after police prevented an Orange parade from proceeding along a contested stretch of the road beside the Ardoyne.

Mr Aughey appeared at Belfast Magistrates Court, where he faced two charges of attempted murder. He spoke once to confirm to the court he understood the two charges against him.

A detective sergeant from the PSNI told the court he was familiar with the case and he could connect Mr Aughey to both charges. He said police were objecting to Mr Aughey being released on bail for a number of reasons, including a risk to the public, a fear that his release could spark further tensions in the flashpoint area and a concern that he would commit further offences.

He claimed the accused was engaged in “provocative conduct” minutes before the collision, with eyewitnesses reporting he was “verbally abusing nationalist residents through the window of his own car”.

He said tensions in north Belfast “remain high” and that if Mr Aughey is released on bail, it could lead to widespread serious disorder in Belfast.

The police officer said this in turn could lead to risks not only to police but also members of the public. The officer also expressed concerns about Mr Aughey’s own safety, should he be released.

A solicitor representing Mr Aughey told the court his client had repeatedly expressed regret about the incident during police interview. “This is a matter which is highly regrettable and is profoundly regretted by the defendant,” he said.

The solictor spoke of his client’s age, his ongoing treatment for cancer and his wife’s ill-health. He said his client is a “law-abiding citizen” whose last appearance in court was over three decades ago for a defective tyre.

Judge Bagnall agreed to release Mr Aughey on bail but imposed a number of conditions, including not going within 500 metres of a “procession, protest or parade.”

He was also banned from entering north Belfast and banned from getting behind the wheel of any vehicle.

Mr Aughey was ordered to appear back in court in four weeks.