Armed unit pulled back from Border duty after gang killings 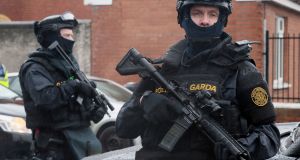 Armed gardaí from the Emergency Response Unit on patrol in Dublin after the recent gangland murders. Photograph: Niall Carson/PA Wire

Members of the Garda’s Emergency Response Unit (ERU) deployed to the Border after the killing last year of Garda Tony Golden in Co Louth have been transferred to Dublin following the recent gangland murders.

The ERU’s redeployment will intensify questions around Garda resources, despite undertakings from the Minister for Justice Frances Fitzgerald to create a new 55-strong armed Garda unit, along with extra money for surveillance.

The transfer will be seen by the Government’s critics as proof the Garda is not sufficiently staffed to be able to combat increasingly active dissident republicans and other criminal gangs operating along the Border, and also deal with gangland criminals in Dublin and elsewhere.

The ERU was dispatched to the Border last October amid allegations the area was chronically under-policed after Garda Golden was shot dead while responding to a domestic disturbance in Omeath. His killing came less than two years after Det Garda Adrian Donohoe was shot dead during a robbery.

Since the ERU’s deployment four months ago, it has set up daily checkpoints and patrols in the Louth Garda division. Garda Golden was killed trying to help Siobhán Phillips who shared a house with her partner, dissident republican Adrian Crevan Mackin, who wounded Ms Phillips and then shot himself dead.

News that the ERU members have been moved comes as the Garda prepares for the potentially flashpoint funerals of David Byrne (34) and Eddie Hutch (59).

Byrne was shot dead in the Regency Hotel in Dublin last Friday and Hutch was killed at his home in Dublin on Monday evening in apparent retaliation. Dates for the funerals have not yet been announced.

While Garda sources said it was unlikely trouble would break out or attacks would be carried out at the funerals by the rival gangs involved in the feuding, there is concern social gatherings around the funerals may be targeted.

Byrne was a member of the Spain-based drugs gang led by Dubliner Christy Kinahan. His murder at a boxing tournament weigh-in was seen as retaliation for the shooting dead of Dublin drug dealer and armed robber Gary Hutch (34) in southern Spain last September by the Kinahan gang.

The killing of Hutch’s uncle, Eddie Hutch, at his home on Poplar Row, north Dublin, on Monday night is believed to have been carried out by the Kinahan gang in revenge for the Regency Hotel attack.

Sinn Féin’s attitude to the Special Criminal Court has been repeatedly targeted by Fine Gael, Fianna Fáil and Labour.

Fianna Fáil TD Niall Collins said: “I think people are appalled and disgusted and I think it really shows them up for what they are and people are worried about it. They want kangaroo courts but they don’t want the Special Criminal Court.”