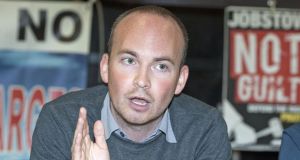 The serving of a summons on Paul Murphy TD ordering him to a court hearing to face charges of falsely imprisoning Tánaiste Joan Burton has formally begun what should prove to be an interesting legal battle. Video evidence will be central to Murphy’s case.

Acts of alleged vandalism, public disorder or even assault against others facing the least serious charges will be decided by video footage in conjunction with evidence that seeks to identify the key people in the footage.

However, legal sources said evidence of that kind, even if it appeared damning, would not be enough to convict Murphy and the 13 other people also charged with falsely imprisoning Burton and her assistant Karen O’Connell at Fortunestown Road, Jobstown, west Dublin, on November 15th last.

Burton and O’Connell were trapped in their car for a number of hours when protesters surrounded the vehicle and staged a sit-down protest as the Tánaiste tried to leave a graduation ceremony at An Cosán College.

Proving those charged with false imprisonment were present, and took an active or leading role in the incident, would not be sufficient to deliver a guilty verdict – a verdict, it is worth noting, that could lead to a custodial sentence of up to life imprisonment. The State must also convince a jury the action was an act of false imprisonment rather than a robust – even ugly and obnoxious – protest against the introduction of water charges.

It is open to the Circuit Criminal Court trial judges to outline what constitutes false imprisonment to the jury. But it is for the jury to decide whether those constituents were present on the day.

And, with any given jury inevitably comprising individuals opposed to water charges, that may prove challenging.

Legal sources said protesters were normally charged with public disorder and charges of false imprisonment were unusual. They said the right to protest is a constitutional one and the jury will be asked to decide whether the events went further than protest.

“The threshold is not as high as most people think,” said one experienced barrister of the charge of false imprisonment.

“Mention the term and some people would think of kidnapping or holding people against their will in a violent way. But, technically speaking, any act that impedes a person is an action of false imprisonment. It could be as simple as putting your hand to a person’s chest or deliberately blocking their passage through a doorway by standing in the doorway and refusing to move.”

Another source said what might prove crucial is whether the nature or tone of the protesters’ actions changed in the course of the incident.

“If a protest changes, more malice or intensity is present; all of these things will be factored in. But even if some of these people admitted they were there and in court outlined in great detail their actions on the day, it’s the jury that’ll decide whether they were protesting and ventured beyond that into the sinister and the criminal.”