All applicants for top Department of Justice job rejected 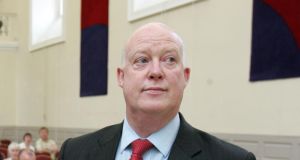 Brian Purcell, who asked to be moved from the position of secretary general in the Department of Justice in July 2014. Photograph: Frank Miller

None of the applicants for the vacant role of secretary general of the Department of Justice qualified for a second interview, it has emerged.

There were just seven applicants for the job, which has a salary of over €185,000, but only three of them were forwarded for preliminary interview.

Almost a year since the position was advertised, a document obtained by The Irish Times speculates that the low level of interest in the post was due to “significant challenges existing in the sector”, media interest and scrutiny.

A memo from Fiona Tierney, chief executive of the Public Appointments Service (PAS), in October last year outlined to Robert Watt, secretary general at the Department of Public Expenditure and Reform and Dr Dorothy Scally, chair of the Top Level Appointments Committee (TLAC), the outcome of preliminary interviews for the position.

The PAS undertook the recruitment campaign on behalf of the TLAC and advertised for candidates on August 29th, 2014.

As of September 18th, when applications closed, there were seven applicants – five men and two women.

The list was then reduced to three and preliminary interviews began on October 15th.

“No candidate qualified at preliminary interview to be recommended for interview by TLAC for this role,” Ms Tierney wrote in her memo, a copy of which was obtained under the Freedom of Information Act.

“This is the first time to my knowledge that this situation has arisen at secretary general level.

“The fact that this campaign attracted a low level of applications may be attributed to a number of reasons, including the context in which the vacancy arose, the very significant challenges existing in the sector, the huge media interest and scrutiny of matters under the aegis of this department, the terms and conditions on offer for the role.”

The head of the department is charged with setting a “clear vision” in terms of strategy and policy and advising the Minister of the day, and carries a remuneration package of €185,350.

A subsequent schedule was later outlined to begin the search again, running over eight weeks from January to February this year, but never went ahead. Noel Waters currently heads the department in an acting capacity.

A briefing note prepared for Minister for Justice Frances Fitzgerald dealing with the lack of appointment said the “complexity, challenges and responsibility” of posts of this nature generally mean there is only a small number of suitable candidates.

Salary considerations have not been an issue in making suitable appointments to such positions, the note explained.

Speaking last October, Ms Fitzgerald said she was disappointed at the lack of appointment and stressed the need to find the “right person”.

She said the role would be re-advertised.

The Department of Justice said that following last autumn’s unsuccessful attempts to find a replacement, no further competition had taken place.