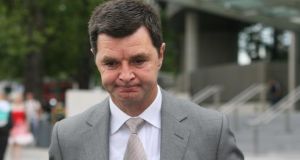 An Air Corps officer was physically threatened by his commanding officer after returning to work from a day spent collecting prizes for a charity fundraiser, a court martial has heard.

Responding to evidence from Lieut Col John Maloney at a hearing on Monday, Commandant Nile (Niall) Donohoe denied assaulting his superior or using insulting language in his presence.

Cmdt Donohoe (52) is facing three charges relating to abusive behaviour, insubordination and assault on a commanding officer during an incident in Casement Aerodrome on August 10th, 2007.

In a cross-examination, Cmdt Donohoe told the court that during a private discussion between the pair, Lieut Col Maloney became aggressive when he accsued him of being “economical with the truth” in relation to his handling of complaints.

“He reacted instantly. He jumped up, shook his fist and raised his hand in an aggressive fashion. He moved towards me and asked ‘are you calling me a liar?’,” said Cmdt Donohoe.

“By his physical presence coming towards me I was forcibly removed into the hall,” he said, adding he felt threatened during the alleged dispute.

In his submission to the court on Monday, Lieut Col Maloney denied any such event took place. He instead insisted his fellow officer refused to leave the office when the meeting ended before following him into the men’s restroom and assaulting him. Lieut Col Maloney also said his colleague had called him “a piece of shit” during the exchange.

Former Air Corps sergeant Davy Byrne told the hearing he could see into the building where the meeting was taking place from the front seat of a car parked outside. He insisted Cmdt Donohoe did not follow Lieut Col Maloney into the bathroom.

Lieut Col Gerry Lane, for the prosecution, accused Cmdt Donohoe and Mr Byrne of giving false testimony and said they, along with fellow defence witness Airman Willie Byrne, were lying.