In the first of a two-part series, a trip to a Rwandan tea plantation leads to an exploration of how the second World War led to the tea we drink in Ireland being of unusually high quality – and what all this has to do with Anglo Irish Bank

Conor Pope travels to Rwanda to learn more about the production of the tea we drink. Video: Conor Pope 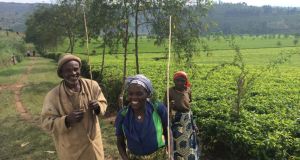 People at work at the Sorwathe Tea Plantation, 90 minutes from the Rwandan capital of Kigali. Photograph: Conor Pope 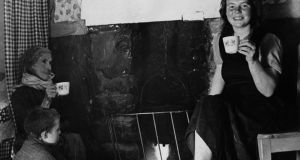 The blame for Ireland’s cataclysmic economic crash can be traced back to tea. Were it not for our enduring love of the stuff, a love stretching back more than 100 years, we might not have been forced by our European overlords to don an economic hairshirt following all that banking unpleasantness in 2008 (more of which anon).

When the second World War broke out, Ireland was, per capita, the third-highest tea-consuming nation in the world, and the Free State was importing more than 11 million kilograms of tea through London’s tea market every year.

With the war came much greater export controls in the UK, and, when its ministry of food took over the tea trade, Ireland lost 75 per cent of its supply almost overnight. This was most awkward for the Irish minister for supplies, Seán Lemass, so to guarantee a steady stream of tea into Ireland – and to avoid his very own Marie Antoinette moment – he set up a new importing agency and a giant warehouse facility in Dublin’s docklands that could store up to two years’ worth of the dried leaves.

This is the single most important reason Irish people drink what is frequently described as the highest-quality tea in the world. When Tea Importers Ltd was established, it insisted Irish tea makers dealt directly with producers in countries of origin. So Irish tea merchants started travelling, and quickly they found that darker teas from east Africa – as opposed to the lighter Indian and Sri Lankan leaves popular in England – went down a treat here.

Relationships were established in Kenya and other east African countries, which allowed Ireland to secure the pick of the crops grown there. Initially backed by government financial guarantees, Tea Importers Ltd became a stand-alone commercial entity in the late 1950s and offered credit facilities to its members, which led to it being granted a banking licence in the 1960s. It renamed itself the Irish Bank of Commerce in the early 1970s, and six years later it morphed into the Anglo Irish Bank Corporation.

Apart from that unfortunate link, Tea Importers Ltd has served us well. In a globalised economy, all the trade in tea could probably be done remotely, but some big-name brands in the Republic still see the worth in sending people out to countries of origin throughout the year to source tea for our pots.

“The Irish consumer doesn’t like Indian teas; they’re too thin,” he explains as he takes Pricewatch on a journey from the Rwandan capital of Kigali to a tea producer some 90 minutes north. We are not so keen on Earl Grey either, he says, because of its heavy artificial bergamot scent. “Darjeeling is known as the champagne of teas, but it has never taken off here either. It’s because we are a dairy country, and, when you add milk to it, it looks like dish water.”

Many Irish people have a very strong, almost emotional relationship with tea, and are fiercely loyal to certain brands, with some homes belonging to Barry’s and others preferring the Lyon’s share. In many ways such loyalty is misplaced.

In the 1950s the market here was diffuse, with more than 50 different tea brands available. Quality differed dramatically depending on where you were and what you bought. Lyons was one of the first great brands to expand nationwide and the first to introduce greater consistency and great advertising – well, the minstrels seemed great at the time. It expanded rapidly throughout the 1960s. Then Barry’s broke out of Cork and started growing the gold-label market. Gold-label black tea dominates now.

Lyons remain the biggest player with a 36 per cent share, with Barry’s not far behind on 27 per cent. Own-brand labels make up another 15 per cent, with Bewley’s on 7 per cent. Tetley’s and Punjani are on 6 and 4 per cent respectively. And Rob Roberts – the Irish company where O’Toole started out – is on 3 per cent.

The tea we drink

Today the place looks like a prison – at least from the outside. The red factory walls are topped with razor wire, a legacy of the 1994 genocide. It was used as a UN base at the height of the massacres, which left one million people dead in just 100 days. “There is still the tension, not always, but it is still there,” Rohith Peiris, the plantation manager tells me.

“The president and the government have done a wonderful job, but it was such an appalling time. It can never just be forgotten. The Hutu are such lovely, kind people. I struggle to understand how what happened could have happened. But it did. It was the herd mentality and the madness of the crowd.”

He describes himself, jokingly, as one of the “Sri Lanka mafia”: he and two fellow nationals head up the operation here. Sorwathe produces three million kilograms of black tea, and it employs 2,500 people directly and buys tea from 4,500 local farmers. It is the only certified fair-trade tea producer in Rwanda and has used money raised through that initiative to build preschools, water purification projects, hospital and computer labs.

Outside the walls, thousands of people in huge, rolling green fields of 3ft-high tea bushes are plucking. Each one is charged with picking two leaves and one bud with each hand motion. If bigger handfuls are picked, it negatively impacts on the quality, while automation is also possible but the human cost would be huge and the quality of the tea would suffer. Everything is so manual here that even the bags the tea is packed in are stencilled by hand. Workers are paid by the kilogram and get 27 francs for each one picked – on a good day they might pick 80kg. It is not a huge sum even here, but it is enough to live on.

O’Toole walks through the factory smelling the tea and sampling the different types being produced. It is clear that what he sees and smells matters to him, both because 15 per cent of the Bewley’s blend is Rwandan and because he has a passion for tea that not even Mrs Doyle could match.

“Look at the gorgeous colour,” he says as we go through a tasting. This is where Rwandan tea comes into its own; it is blended with Kenyan tea and tea from Assam and adds such a dark, rich colour and a nice brisk flavour. That is what Irish people really want.”

GO ON: LITTLE KNOWN FACTS ABOUT TEA All tea – green, black, white and oolong – comes from the same plant, Camellia Sinensis, which, when left to grow in the wild, can grow to up to 10m tall; but, on plantations, the bushes tend to be pruned carefully and grow no taller than 2m.

A report in the New York Times in 1894 ran under the headline “Tea drinking in Ireland; Report discussed in House of Commons that it has caused insanity”. Underneath was a report that started: “In the House of Commons to-day Stanley Leighton asked John Morley. chief secretary for Ireland, if the government had given any attention to the special report showing the increase of insanity in Ireland from the habit of tea drinking.”

Most Irish teas are produced using the CTC method: cut, tear, and curl. It started taking over from what is known as the orthodox tea method about 40 years ago. Instead of the leaves being rolled at the end of the process, they are passed through a series of cylindrical rollers that cut, tear and curl the tea. This makes it stronger.

Tea experienced retail value sales growth of 2 per cent in Ireland last year but volume sales fell by 1 per cent.

That is not to say tea is in danger of losing its pre-eminence here. While China is far and away the largest consumer of tea – going through 725 million kilograms a year, on a per-capita basis Ireland is in first, second or third spot in the world, depending on who you believe. We consume between 2.7kg and 4kg per head each year – or about 1,300 cups each. Next week: Coffee in the colonies

* Conor Pope travelled to Rwanda as a guest of Bewleys