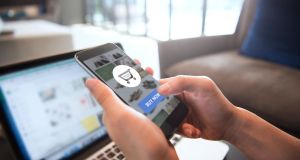 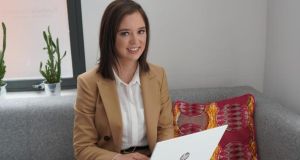 Ciara Hennebry of croiaireland.com: “Shopping locally and supporting Irish talent has always been a huge passion of mine” 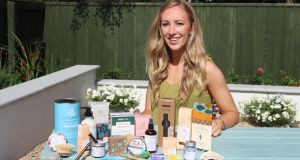 Fiona Smiddy of greenoutlook.ie: “I would love to grow the business and the product range and I want to keep it as Irish as possible.”

We all love an underdog and it is hard to cheer for Goliath even when he is flogging virtually everything your heart desires at prices, he claims, are lower than anything David can match. And with Ireland undergoing a warp speed retail revolution we can expect to see a raft of David versus Goliath-style battles in the months and years ahead.

Research published by Bord Bia last week pointed to the scale of that surge. Since 2017 the number of Irish people shopping online has jumped by 75 per cent and looks set to jump by a further 50 per cent over the next three years suggesting the retail revolution is only just starting here.

Bord Bia’s study found that 34 per cent of Irish consumers who bought groceries over the internet in 2020 were first-timers. That is a telling stat as grocery is a sector which has long lagged behind other categories in transitioning to online. Today it is the fastest-growing category, the survey suggests.

And growth is evident everywhere. According to recent figures from the Central Bank the total online expenditure in Ireland amounted to €2.5 billion in December, a 21 per cent year-on-year increase with about half of that spend leaving the country.

While the notion that over a billion euro disappeared from the local economy in a single month is depressing, it is actually something of a good news story too because it points to a massive shift in favour of local businesses. In previous years the percentage of online spending which left Ireland each month hovered at around 70 per cent.

The year of Covid has revealed a clear desire amongst Irish people to shop local. Last October Google Ireland reported that searches for “just buy Irish” peaked with an increase of 3,495 per cent. The search term “shop local Ireland” increased by 540 per cent and “buy Irish gifts” searches increased by 200 per cent.

A Pricewatch list of local retailers selling Christmas gifts online ended up being the most read story of 2020 on The Irish Times website.

While the displays of social solidarity evidenced by people spending their money close to home is clear, it will face its sternest test in the year ahead with the imminent opening of an Amazon Fulfilment Centre here which will see the biggest retail Goliath of them all extend its reach into ireland like never before, reshaping how we shop.

Taking on a company valued at $1.7 trillion might seem foolhardy and futile but Irish retailers and e-tailers and not ready to throw in the towel and are getting their slingshots ready.

Alongside existing Irish retailers there are young entrepreneurs setting out their stalls, giving Irish people more choices and starting up operations with a social purpose.

croiaireland.com
While Ciara Hennebry’s Croía Ireland is still in its very much in its infancy and a long way from being able to compete against Amazon, she is hoping its focus on exclusively Irish brands and Irish-made products will give her a chance in the retail wars.

She launched her trading platform – croiaireland.com – where Irish businesses “can connect with a targeted online community” last November with one goal in mind : “to give back”.

But give back to who and why?

“Shopping locally and supporting Irish talent has always been a huge passion of mine,” the 25-year-old marketing graduate says. That was behind her decision to set up the platform and she wanted “to give back to Irish businesses and provide to them not just a selling platform, but an empowering and encouraging community to become a part of.”

Now anyone who has ever watched the Apprentice will know that the two words would-be sidekicks of Alan Sugar rely on more than other to sell themselves are “passion” and “vision” .

So having ticked the first box, what about the second one?

Hennerbry says her “vision is to become the go-to online store for high-quality Irish goods that are fashionable and made with love. We want to promote longevity and durability in online purchases; a piece from Croía is something to have in your heart always.”

She says last year was tough “for our homegrown businesses, but we have been delighted to see the welcoming and positive reaction so far from both suppliers and potential consumers alike, so we cannot wait for the Croía journey to begin.”

Her site hosts about 100 Irish suppliers from small businesses to larger well- known brands. “We are definitely on track at the moment,” she says. “We have close to 700 products on the site and we hand- pick every single supplier to make sure it is suitable for the target market.”

She says she is competing against Amazon, Etsy and Asos. “I would say Amazon has the electronics and Etsy has the gifts but I also see us as an Asos for Irish business. Our core market is between 22 and 45. A lot of people don’t know that there are so many great Irish brands and if I can encourage people to buy Irish I will have achieved something. “

Her goal for the next six months is to get 500 businesses onto her site and then 1,000 by this time next year. From start-up to February she was listing companies at no charge but as of now she charges 15 per cent commission on sales which she says “is a good bit cheaper than the competition”.

greenoutlook.ie
Fiona Smiddy is another young entrepreneur selling online but her competition is not confined to a handful of other sites – even giant ones such as Amazon – and she is competing with some of the biggest multinational brands in the world while trying to save the planet too, or at least stop it being destroyed at quite such a breakneck speed.

Until a couple of years ago she worked for a renewable energy company but it went under and with time in her hands she set off travelling the world. In some of the poorer countries she visited she saw up close the environmental and economic hardships western consumption was wreaking on the world. Then later on her journey, in New Zealand she was impressed by the concentration of cleaning and grooming products which had consciously dispensed with plastic packaging.

“I hadn’t really seen anything like that in Ireland and decided that when I came home I would set up a business.”

So she did and greenoutlook.ie was born. It was entirely self-funded. “I built most of the business around social media and in the first months my sales were 50 per cent local markets and 50 per cent online but with Covid it has been all online and the uplift and the support from customers have sky rocketed.

“I have a lot of Irish-made shampoo bars, we also look to bring on board other businesses that try and be sustainable so we have no gimmicky products. I do a lot of research into the products before I buy. When you are restricted with your budget you have to be very careful about how you spend your money.

She says that people come to her site for different things. “Some will be young and looking to the future and wanting to live more sustainably. But then we have customers with cancer and keen to use the most natural products and then you have families.”

Greenoutlook is still just herself. “But I would love to grow the business and the product range and I want to keep it as Irish as possible.”