The story behind the hoverboard - this year’s Christmas craze 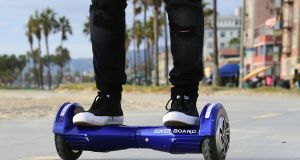 In all the years of Christmas gift crazes, has there ever been one as mysterious as the brazenly misnamed hoverboard?

The two-wheeled self-balancing scooters have come from nowhere to be this year’s hottest Christmas gift, which is retailing for about €400.

But hoverboards, as we will reluctantly call them, are attracting lots of headlines about their propensity to go on fire or even explode.

At least 10 house fires across the US have been attributed to the gizmos, Amazon have stopped stocking most of them online, the UK’s National Trading Standards has deemed 88 per cent of them unsafe, the US postal service will no longer ship the gadgets and this week Brown Thomas was among a handful of retailers here who were ordered to remove non-compliant hoverboards from sale.

Those concerns are exacerbated by the difficulty in assessing whether any of these pass safety standards, which highlights perhaps the most unusual thing about hoverboards — it’s not very easy to determine where they come from.

Usually, a Christmas craze is the result of a carefully orchestrated marketing and production machine from some large, identifiable corporation.

The likes of Disney, Mattel or Nintendo, say, will put huge time and resources into building the hype around singing Frozen dolls, Cabbage Patch Kids or Wii games consoles, and ensuring the complex production and supply chains sate the seasonal demand.

Hoverboards, on the other hand, seem to have just arrived, with no single brand, no orchestrated marketing push and weirdest of all, no obvious inventor.

They are obviously an evolution of the Segway, the ill-fated self-balancing scooter that arrived in 2001 amid huge amounts of hype, but which never gained mainstream acceptance.

In appearance, hoverboards have essentially just stripped away the Segway’s steering column and handle bars, and hey presto, they’re all the rage.

But no single company can be credited for giving the Segway a minimalist makeover, or developing the self-balancing technology, or marketing them.

The most likely creator is Portland-based inventor Steve Chen, who had a successful Kickstarter campaign in May 2013 for what he called a Hovertrax.

But a patent dispute slowed Chen’s progress in bringing the Hovertrax to market, and in the meantime, the hoverboard fad went viral.

According to a recent episode of the US finance podcast Planet Money, plans for a “motorised balance board” proliferated among manufacturers in the global gadget epicentre of Shenzhen, China, where they can quickly source off-the-shelf parts and assemble the scooters in huge numbers.

One factory manager there quoted by BuzzFeed estimates there at least 1,000 factories in the Shenzhen area making hoverboards.

It’s an unorthodox route to market for the season’s must-have gift, and has directly led to the current safety concerns — without a single manufacturer or brand to maintain standards, and with the suddenly huge demand, countless manufacturers are hastily churning out as many hoverboards as possible, and cutting corners to do so.

One easy cost-saving is in the lithium-ion battery – instead of high-quality Samsung batteries, say, manufacturers are increasingly using knock-offs, which are prone to short-circuiting.

Given the complexity of the supply chain, it’s almost impossible to determine which hoverboard brands are sourcing high-quality parts.

Safety standards will inevitably improve, but in the meantime, maybe just get a pair of rollerblades.

1 ‘It was pitch black’ - Rescued teenager describes night afloat with her cousin in Galway Bay
2 Schools urged not to demand clean uniforms each day
3 A million trees, including 400,000 oaks, to be destroyed this week
4 Inside the O’Brien Fine Foods factory in lockdown Kildare
5 Aaron Brady, the man who said with pride he was a cop killer
Real news has value SUBSCRIBE