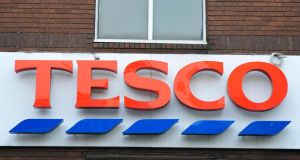 Tesco remains the most supermarket, but the new figures covering the 12 weeks up to the end of March, show its market share falling from 27.5 per cent at the end of March last year to its current level of 26 per cent. Photograph: Aidan Crawley

SuperValu continues to close the gap on market-leader Tesco and while its market share has dipped slightly over the last 12 weeks, it is now less than one per cent behind the State’s supermarket frontrunner, according to the latest figures from retail analysts Kantar Worldpanel

Both Aldi and Lidl are continuing to out-perform the market with both recording strong sales growth over the last 12 weeks with the former growing its market share by 21.9 per cent and the later increasing its slice of the supermarket pie by 11.1 per cent to 7.5 per cent. At the end of 2012 German headquartered Aldi and Lidl both had a market share of 6.2 per cent.

While Tesco continues to attract high numbers of customers through its doors, with the number of shopping trips falling by just 1 per cent, the spend is shrinking with customers picking up an average of one item less per shop.

By contrast Aldi is capturing more spend from its shoppers and each shopping trip has grown by an average €2 per two additional items being added to baskets, according to David Berry, commercial director at Kantar Worldpanel,.

“Lidl has also performed strongly with double digit sales growth for the fourth successive month. This growth is likely to continue in the coming months thanks to a number of recent new store openings,” Mr Berry said.