So you don’t understand the Internet of Things? Don’t worry, you soon will

Smart pills, driverless cars and fridges that know what you need to stock up on: everything is about to become connected in what some are calling the greatest upheaval since the industrial revolution 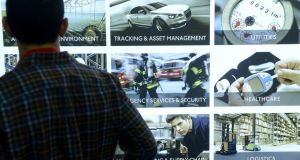 A giant screen at the 2015 Internet of Things Solutions World Congress in Barcelona in September. Photograph: Josep Lago/AFP Photo

But they will soon.

If its proselytisers are to be believed – and they probably are – the consuming world is about to live through the greatest upheaval since the industrial revolution.

It is far from such bold claims that the Internet of Things was reared. It was born at a US conference in 1989 when a techie called John Romkey was challenged by another techie to build an internet-ready toaster. He did, and it made its debut at the same conference a year later. Then, a year after that, a robotic arm was added to his device to allow bread to be picked up and dropped into his internet toaster remotely.

In truth, Romkey’s toaster wasn’t much to look at and its functionality wasn’t too far removed from the Teasmade machines of the 1960s and 1970s, but it was not what the toaster did but how it did it that really mattered.

Although the world’s grasp of the Internet of Things might be iffy, defining it is not complicated. It is all about connecting devices over the internet and getting them to talk to each other while we go about our daily business. The most commonly used example is the smart fridge, which will use cameras and other sensors to monitor what you have chilling and alert your phone when you’re running low on key items. If the smart fridge sounds more bothersome than useful, it is only an illustration of what is to come.

Three years ago, industry pundits and analysts predicted that, by 2020, the market for connected devices would be hovering around 100 billion units; that is, 10 times more than are currently connected. The forecast has been scaled back since then, but, even so, as many as 50 billion different things will be connected to the internet over the next five years, which is more than seven devices for each person on the planet.

The term Internet of Things started life as the title of a presentation delivered to senior executives at Proctor & Gamble by Kevin Ashton. Writing a decade later, he defined what he meant: “Today, computers – and therefore the internet – are almost wholly dependent on human beings for information . . . The problem is, people have limited time, attention and accuracy.

“If we had computers that knew everything there was to know about things – using data they gathered without any help from us – we would be able to track and count everything, and greatly reduce waste, loss and cost. We would know when things needed replacing, repairing or recalling, and whether they were fresh or past their best. We need to empower computers with their own means of gathering information, so they can see, hear and smell the world for themselves, in all its random glory.”

On one level, this all sounds like a dystopian vision taken from the pages of a Philip K Dick story, but at its most benign, it should improve the quality of life of most of us.

Already the focus is on how it will improve our health. Smart pills – ingestible sensors that record all manner of physiological measures – are being dispensed. They can track whether patients are taking prescribed medications at the right dose and measure the impact the drugs are having in real time, beaming relevant information to healthcare providers without patients needing to do anything. Admittedly, the Irish healthcare system does not seem particularly well-placed to process this information in a useful way, but it is early days.

Intel has also developed a smart band that tracks how much patients with Parkinson’s disease shake, which will allow doctors to collate better information faster. Technology from a company called Sonamba can monitor the activity of elderly or otherwise at-risk patients to watch for dangerous anomalies, while people with heart disease can use technology from AliveCor to detect abnormal heart rhythms.

On a simpler level, we also have smart watches and fitness bands that allow us to track our movements, our sleep patterns and our heart rhythms.

Tracking your steps, how many calories you burn, your heart rate and the number of times you climb your stairs, which is what the market-leading devices from Fitbit do, can be mildly diverting, but the technology involved can do a whole lot more than divert.

Earlier this month a smart watch saved the life of 17-year-old Paul Houle jnr, a high-school football player from Cape Cod. Before he went to football practice on the morning of September 8th, a reading from his brand-new Apple Watch told him his heart rate was a normal 60 beats per minute. During the training it climbed to 145bpm, again perfectly normal.

But later his watch told him his heartbeat remained elevated. He was also experiencing back pain. He mentioned this to his trainer, who checked his pulse, after which he was brought to hospital and diagnosed with a syndrome that was causing his organs to fail.

The other area where the Internet of Things is already making a stir is the field of domestic energy. If your heating system is not doing so already, it won’t be long before it starts learning your habits and gets your house to your desired temperature just before you arrive home. It will know when you leave the house, and as soon as you’re gone it will turn everything off to help reduce waste and cost.

At least part of this technology is already installed in many people’s homes. Google’s Nest is a “learning” thermostat, which comes bundled with a smart smoke and carbon monoxide detector that will text you when smoke is building up in your home, and when it is clearing. Nest also has a connected security camera, which can be used as a baby monitor or a device to see what your dog gets up to when you’re at work. Its main function is to serve as a home security system you can access whenever you want, wherever you are.

Then, of course there smart fridges. They are not widespread yet, but soon all the coolest fridges will know when you are running low on staples and will make a grocery list on your smartphone.

And what about your car? Google is doing trials of a driverless smart car at various locations around the world. Earlier this summer its fleet clocked up a combined total of one million miles travelled. That’s one million miles and only 14 minor crashes, all of which were the fault of the other driver.

Apple aims to release its first car in 2019, according to a report last week in the Wall Street Journal. The initiative, code-named Project Titan, already has 600 people working on it and the company plans to treble that number. Fingers crossed that Apple car’s batteries will be more enduring than those of its phones, or we’ll struggle to get to the local shop and back on a single charge.

In truth, it will be years before the Apple or Google cars come to pass, but in the meantime, as the Internet of Things gathers pace, smart cars will check your oil, water, tyre pressure and the rest, and contact your mechanic when it is time for a service or when the timing belt is about to snap. It will then check your digital diary and book it in to be serviced at a time that suits you.

Meanwhile, traffic lights will talk to cars and tweak their own timings to ensure the fastest traffic flow, while sensors will keep an eye on the weather and road conditions and communicate the details to cars.

Road sensors will also be able to talk to your alarm and wake you up early if traffic is heavy or if there is an accident on your route to work, or let you sleep in for a bit on those days when the roads are clear.

And no child will be left behind in our brave new world either. Connected babygros will soon be a thing. These electronic playsuits will alert parents if they detect anything out of the ordinary going on – something that is likely to freak out many first-time parents in particular.

And at the core of everything we do will be our smartphones: they will hook us into the Internet of Things and control our lives in ways that will make their already omnipresent role seem rather removed.

You just better hope you don’t lose it.

THE SMARTS: FROM BREWING A COFFEE TO HOME SECURITY