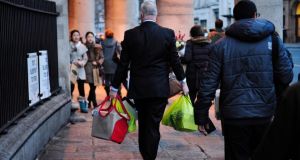 Spending on Christmas shopping will be down this festive season, according to Retail Excellence Ireland. Photograph: Aidan Crawley.

Spending on Christmas shopping will be down this festive season, according to retailers.

Retail Excellence Ireland claimed customers are being cautious and keeping their cash for the sales, while adverse weather in recent weeks has also impacted footfall.

The organisation’s chief executive David Fitzsimons said retailers are preparing to reduce prices by upwards of 70 per cent in the sales “in a bid to convert stock to cash”.

“Having contacted over 300 leading retailers nationwide over the past few days it is disappointing to confirm that retail sales are likely to be down marginally against Christmas 2012,” he said.

“While consumers might have a little more discretionary income than this time last year, even with cash in our wallets we have become habitually frugal and discerning.

“It would seem that six years of cautious spending behaviour has become a hard habit to break.”

Mr Fitzsimons said the retail industry was bullish entering the festive season due to the rescheduling of Budget 14 to October, a return to economic growth and the departure of the troika.

“Unfortunately these positives did not impact on spending in the run up to Christmas 2013,” he continued.

“Instead customers remained cautious and retailers responded with significant discounts.”

He said the residential property tax also damaged consumer sentiment and dampened Christmas spending, along with the weather.

Last week Allied Irish Bank (AIB) customers were unable to withdraw money from some ATMs because they were mistakenly registered as being over their daily limit.

“What this means is that retailers are carrying significant stock levels into the sales period,which can only mean one thing — exceptional value for the Irish consumer,” he added.

“It is likely that the sales period will be one of the best on record.

“Retailers have not sold through on significant lines of stock and this will be priced to sell over the period of the sales.”

Mr Fitzsimons said the Irish customer has never had it this good.

“Retailers are preparing to reduce prices by upwards of 70% in a bid to convert stock to cash,” he added.