Analysis finds 1,000 new jobs created as a result of measure 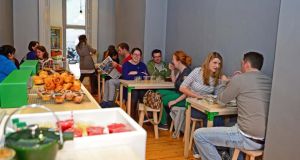 Restaurant owners have urged the Government to retain a measure which reduced value added tax (VAT) to nine per cent in the tourism sector almost two years ago. The Restaurants Association of Ireland launched its “‘Keep Vat at 9%” campaign at its annual conference in Dublin this morning.

Economist Anthony Foley of Dublin City University (DCU) Business School said his analysis found that about 1,000 new jobs had been created in the restaurant sector alone directly as a result of the VAT reduction. Other sectors such as catering services, hotels, cinemas, theatres and hairdressing have also benefited from the Vat reduction.

He said the measure should be retained because the difficulties in the economy that led to the reduction had not gone away yet, and the sector had significant potential for job creation.

Mr Foley said there was a lack of joined-up thinking by the Government when it came to the hospitality sector. “The Government brought in the nine per cent VAT rate basically to help the hospitality sector but in the meantime it increased the general rate of VAT from 21 to 23 (per cent) which affects alcohol serving in restaurants. In addition it increased the excise rate on alcohol particularly in wine, by over 40 per cent,” he said.

“So in fact paradoxically if the Government didn’t maintain the nine per cent VAT rate in 2014, it would leave the restaurant sector worse than it was before it introduced the nine per cent rate in July 2011.”

Restaurants Association of Ireland chief executive Adrian Cummins said the decision to reduce the rate for tourist services had been “incredibly successful” and had helped to kickstart a reversal of fortunes. “In the past 18 months, over 10,000 new contracts were issued and this growth will continue with an additional 5,000 jobs to be created over the next year if VAT at nine per cent remains in effect,” he said.

There would be “shockwaves throughout the sector” if the measure was reversed. “Not only does it help businesses in our industry but it has had an immense impact on food producers and suppliers, workers, and the communities within which they operate. The ripple effect is far reaching as many of our trade partners know to their benefit,” he said.