A reader complains of intransigence at the check-in desk 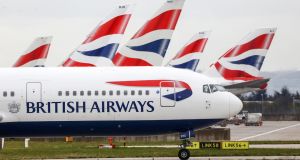 British Airways “could have printed the passes if they wanted to”. Photograph: Chris Ratcliffe/Bloomberg

Caroline Byrne had what sounds like a nightmare experience with British Airways over the Easter bank holiday weekend. “We were to fly from Gatwick on Easter Sunday,” her email starts. “We allowed enough time to ensure we would be at the airport one hour and 40 minutes before our flight was due to leave.”

It didn’t work out that way. “We got stuck in a bit of traffic but we still got to the BA check-in before the 45-minute cut-off rule to issue boarding passes. We only had hand luggage. There was a queue at check-in. We thought we would be fine.” She rushed over to the kiosks and tried to check in. It wouldn’t let her because she says it would have been just at the 45-minute cut-off. “I know BA will insist that they are well within their rights to refuse us check-in, but we were just in time. They have the ability to over-ride the system and issue boarding passes, and as we only had hand luggage and had plenty of time to go through security, they could have printed the passes if they wanted to.”

The flight was actually delayed by an hour, she says, so they could easily have made it if the will was there.

She says staff seemed hassled and one “fussily pointed out that we should have checked in online and berated us for being late. The thing is, BA prides itself on being different to other, low-cost, carriers but I found them unsympathetic – worse than Ryanair”.

After she was refused boarding she queued to try to buy tickets for the next flight to Sicily. It was two days away and the cost would be about £300 (€379) single. “We could not afford this. I asked if there was anything else. She offered a flight the next Friday for about £250 each, which would give us two days in Sicily. There was no effort on their part to try to make the situation better.”

So Byrne returned to her home having lost her holiday and all the upfront expenses. She then booked with Easyjet to fly to Sicily but missed more than half a week of her holiday.

“I know you hear much worse horror stories, and yes, I could have checked in online, but we have not had problems before printing our passes off from the airport kiosks, and we were still in time once we arrived at the BA desk. But they are not acknowledging this aspect of our complaint and have refused to refund us anything.”

We contacted the airline. It failed to address the manner in which our reader was treated by BA staff and the inflexibility displayed, which cost our reader hundreds of euro, ruined her holiday and makes her unlikely to ever fly with British Airways again.

“More than 40 million customers choose to fly with us every year, and we do our very best to facilitate their travel needs,” went the formulaic response. “In order to provide a safe and punctual service for all our customers we do not accept customers for travel after check-in has closed. We advise all passengers to check in a minimum of 45 minutes in advance and to use online check-in, where possible, to help ensure the smooth running of their journey.”

We hopped on the wrong bus
In last week’s 1916 special on the Pricewatch page, we said the first bus service in the city was the 43 to Killester, in July 1925. Cyril McIntyre got in touch to tell us this is incorrect. The 43 was the first bus route started by the Dublin United Tramways Company, but there were earlier bus routes run by other operators, he says.

“For a short time in 1919 a service operated between O’Connell Bridge and North Wall, presumably in connection with steamer arrivals and departures,” he writes. Then in April 1919 the Clondalkin Motor Omnibus Company started a service from the tram terminus at Inchicore to Clondalkin village. “It was owned by two publicans, PJ McEvoy of Inchicore and TF Healy of Clondalkin, and in 1926 it became the Irish Omnibus Company – the direct ancestor of today’s nationwide network operated by Bus Éireann.”

Mr McIntyre has more. After the end of the Civil War in 1923, some ex-servicemen used their demobilisation gratuities to buy a small bus, taking advantage of the lack of regulation to compete with each other and with the tramway company and railways.

“In 1924 the Contemptible Omnibus Company, owned by Mrs Kathleen Gilbert of Clontarf, started a service from Eden Quay to Killester, primarily to serve the ex-servicemen’s housing estate built there in the aftermath of the first World War. She later expanded with routes to Philipsburgh Avenue, Howth and Dollymount. In the same year, the Tower Bus Service, owned by the Spendlove family of Chapelizod, started a service from Parkgate Street to Lucan. ”

Even before the Easter Rising there were efforts to start city bus services. In May 1908 the Mercury Motorbus Company ran between Aston Quay and Rathmines via Harcourt Street, using at least two double-deckers imported from London. The operation appears to have lasted for only a few weeks. In 1913 Thompson’s Motor Company of Great Brunswick Street was running a daily service from Garristown in north Co Dublin to a city terminus was on Phibsborough Road.”

We are happy to set the record straight.