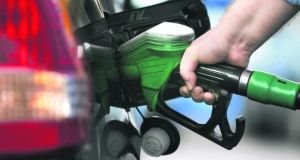 Irish petrol stations are taking an “inordinate” amount of time to lower their petrol and diesel prices to reflect the latest crash in crude oil prices, the Consumers Association of Ireland has said. Photograph: Dara Mac Dónaill/The Irish Times

Irish petrol stations are taking an “inordinate” amount of time to lower their petrol and diesel prices to reflect the latest crash in crude oil prices, the Consumers Association of Ireland has said.

Oil prices fell by 30 per cent on Monday following a stand-off between Saudi Arabia and Russia and leading to a slump in global stock market shares and triggering fears of a global recession. Prices tumbled after Saudi Arabia launched an oil price war with Russia by slashing its official selling price and outlining plans for an increase in crude production next month.

A spokeswoman for the Irish Petroleum Industry Association said it was “unrealistic” to assume the price an Irish motorist pays at the pump would change automatically due to a drop in crude oil prices. Crude oil accounts for less than a quarter of the cost of diesel and petrol, while taxes, levies and excise make up the majority of liquid fuel costs, she said.

Dermott Jewell of the Consumers’ Association of Ireland, argued that Irish consumers were fed up with “history repeating itself” regarding the high cost of fuel.

“It’s like deja vu. Across the years Irish consumers and businesses have experienced this dilemma whereby there is an inordinate period of delay before prices at the pumps reflect significant drops in the basic prices of crude products”.

He acknowledged the high taxation of petrol but noted that Ireland’s “exorbitantly high level of tax” on fuel should also be reduced to make petrol more affordable for Irish consumers.

Conor Faughnan, AA director of consumer affairs, said he expected to see a “substantive reduction in fuel prices” in the coming weeks but said the delay between crude oil prices dropping and price cuts at the petrol pumps was normal.

“You sometimes do get a shock to oil prices but you have to wait to see if it’s sustained. But in a case like this, there has already been a significant fall in the last month so I would confidently expect to see a reduction in our fuel prices.”

Mr Faughnan also noted that consumers underestimate the high tax on fuel which currently makes up around 65 per cent of retail prices. “People want to see the same drop in petrol that they see in oil prices but tax is charged by the litre, it doesn’t fluctuate with price.”

In a statement, Maxol group said crude oil prices had continued to drop at an “unprecedented rate” since February but warned of a “significant lag” before prices fall at the pump.

Maxol said it was already reducing pump prices and would continue to monitor the situation on a daily basis.

A spokeswoman for Circle K said the company had recently seen pump prices across the network decrease at an average 3.5 cent per litre. She also underlined the high taxation, Vat rates and “obligatory costs” on fuel prices in Ireland, noting that these elements “do not change with market movements”.

“The eventual product retailed by Circle K is calculated based on the cost of refined product at time of purchase, therefore, when crude oil prices fall this is not immediately reflected in market prices across our network of service stations.”